The Prince & The Art of War: Two Classic Works of Strategy, Tactics and Politics by One of the Foremost Proponents (Hardcover) 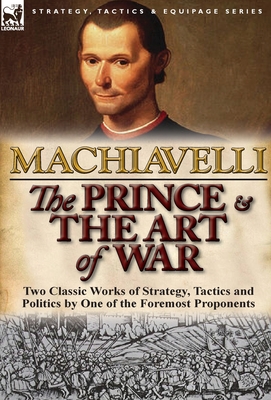 The Prince & The Art of War: Two Classic Works of Strategy, Tactics and Politics by One of the Foremost Proponents (Hardcover)


Usually Ships in 1-5 Days
Two Masterpieces of tactics and strategy There have been few men so distinguished that their names have been embraced into the language, but the author of the two works in this special Leonaur edition is a notable and famous example. Everyone who is aware of Niccolo Machiavelli, the Renaissance Florentine founder of political science knows his name is a by-word for the real or 'devil's politics'-the ruthless system employed by most men and institutions of power and the practice of which is-naturally-roundly denied by all of them. Machiavelli was, in fact, a man of many other talents and parts. Poet, songwriter, civil servant, diplomat, playwright and philosopher. He held office in the Florentine Republic whilst the Medicis were out of power and wrote his masterpiece and most famous work, The Prince, on their return to Florence. Today, some 500 years later, Machiavelli's theories remain highly respected and are still studied by military men, politicians and those in business. Machiavelli's The Art of War-politics by other means-makes a fitting companion piece to The Prince in this new edition which will be a valuable addition to any library.
Leonaur editions are newly typeset and are not facsimiles; each title is available in softcover and hardback with dustjacket.