Ambushes and Surprises: An Analysis of Tactics from 217 B.C.-1857 A. D. by Describing the Historical Examples (Hardcover) 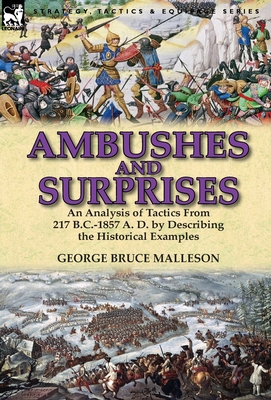 A history and analysis of the most devastating tactic Most students of military history will be familiar with the works of George Bruce Malleson; he was a prodigious author on the subject and his scholarship has always been regarded as of the highest standard. This excellent book will be of much interest to those concerned with the practice of military craft. It examines critically and in detail that most desired of circumstances, which is when a battle is won, where the victorious outcome is all but certain instead of fought, where the potential for defeat is always possible. The unseen attack to the flank, the ambuscade and the sudden appearance of the enemy whose presence was unknown is not new to warfare. Indeed its principle is universal, since it is the method employed by every carnivorous creature that runs, flies or swims, in order to secure its meal and avoid injury in the process. Malleson provides eight examples of the tactic employed at its most devastating. We learn among others, of the defeat of the Roman legions in the Teutoburg Forest, the destruction of Roland, knight of Charlemagne in the high passes of the Pyrenees and of Braddock and his column slaughtered in the dense forests of America during the French and Indian War. What makes this work particularly interesting is Malleson's decision to include two pieces, from the Crimean War and the Indian Mutiny, where against the odds the surprised force under inspired leadership has managed, in measure, to prevail. This excellent examination of ambushes and surprises considers examples spanning two thousand years of warfare and will be fascinating to everyone interested in the field of battle at its most extreme.
Leonaur editions are newly typeset and are not facsimiles; each title is available in softcover and hardback with dustjacket.