Napoleon's Campaign in Russia 1812: An Analysis of the French Campaign from a Logistical and Medical Perspective (Hardcover) 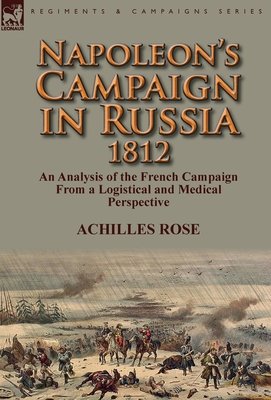 A different perspective on the annihilation of an army All students of the Napoleonic era know that the Emperor marched the 'Grande Army' of nearly 430,000 men across the Niemen and eastwards into Russia. After the pyrrhic victory of Borodino the French occupied Moscow in the expectation of wintering behind the comfort of its walls in readiness for the reopening of campaigning weather the following spring. The Russians were determined to deny them that luxury and set Moscow ablaze before retreating farther into the vastness of their land, adopting a scorched earth policy that stripped the countryside of anything useful to their enemy. Napoleon realised that his position was untenable and that retreat was inevitable. The Grande Army had already been reduced to 100,000 men simply to arrive a this hopeless position. As winter-the Russian's best ally-closed in, the temperature plummeted to extremes even by Russian standards. Fatigue, hypothermia, starvation and disease added to the destruction of the invading army and silently aided the harrowing Cossacks to increase the death toll. By the time the French reached the River Berezina their numbers had been reduced to 50,000 men and after the disasters of its crossing to half that number. Only 10,000 French and allied soldiers arrived back at their starting point, where the army had seemed to be a conquering force of unstoppable size and capability. Very few of the survivors belonged to the column that had marched all the way to Moscow and back again. Achilles Rose's book takes the reader on this terrible campaign and adds new insights to the already familiar story; usefully the author draws upon the experiences of soldiers from the smaller German allied states and this gives his narrative a different and interesting perspective. Rose has also studied the true causes of the total destruction of Napoleon's Army which had little to do with bullets, bayonets or cannon-balls. In fact close examination of medical and logistical issues persuaded Rose that this was an 'army of the doomed' from the first day of its march. An absolutely essential account in every way-and highly recommended.
Leonaur editions are newly typeset and are not facsimiles; each title is available in softcover and hardback with dustjacket.