The Bliss of Inner Fire: Heart Practice of the Six Yogas of Naropa (Paperback) 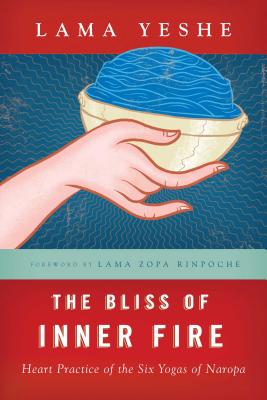 In the classic bestseller, Introduction to Tantra, Lama Yeshe offered a profound and wonderfully clear glimpse into the sophisticated practices of Tibetan Buddhist tantra. This present book, the last major teachings of this great lama, opens up the world of advanced practices for Highest Yoga Tantra initiates in much the same way his earlier work opened up the world of tantra in general. Following Je Tsongkhapa's (1357-1419 C.E.) text Having the Three Convictions, Lama Yeshe introduces the renowned Six Yogas of Naropa, focusing mainly on the first of these six, the practice of inner fire (tummo). Mastery of inner fire quickly brings the mind to its most refined and penetrating state--the experience of clear light, an extra-ordinarily powerful state of mind that is unequaled in its ability to directly realize ultimate reality. Lama Yeshe felt that twentieth-century Westerners could easily grasp the often misunderstood ideas of this esoteric tradition: We really need tantra these days because there is a tremendous explosion of delusion and distraction.and we need the atomic energy of inner fire to blast us out of our delusion. Lama Yeshe's aim was for his students to actually taste the experience of inner fire rather than merely gain an intellectual understanding. Lama's own realization of the transformative power of these practices comes through, inspiring his students to discover for themselves their own capacity for inexhaustible bliss.

Lama Thubten Yeshe (1935-1984) was born in Tibet and educated at the great Sera Monastic University. He fled the Chinese oppression in 1959 and in the late 1960s, with his chief disciple, Lama Thubten Zopa Rinpoche, began teaching Buddhism to Westerners at their Kopan Monastery, Kathmandu, Nepal. In 1975 they founded the international Buddhist organization, the Foundation for the Preservation of the Mahayana Tradition (FPMT), which now has more than 160 centers, projects and services worldwide. Ordained since the late 1970s, Ven. Robina has worked full time since then for Lama Thubten Yeshe and Lama Zopa Rinpoche's FPMT. Over the years she has served as editorial director of Wisdom Publications, editor of Mandala Magazine, executive director of Liberation Prison Project, and as a touring teacher of Buddhism. Her life and work with prisoners have been featured in the documentary films Chasing Buddha and Key to Freedom. Ordained in 1987, Venerable Ailsa Cameron is a close student of Lama Zopa Rinpoche and has been editing his teachings since 1984. She lives at the Chenrezig Institute in Queensland, Australia. Lama Thubten Zopa Rinpoche is the Spiritual Director of the Foundation for the Preservation of the Mahayana Tradition (FPMT), a worldwide network of Buddhist centers, monasteries, and affiliated projects, including Wisdom Publications. Rinpoche was born in 1946 in the village of Thami in the Solo Khumbu region of Nepal near Mount Everest. His books include Transforming Problems into Happiness, How to Be Happy, and Ultimate Healing. He lives in Aptos, California.