Son of the Morning Star: Custer and The Little Bighorn (Paperback) 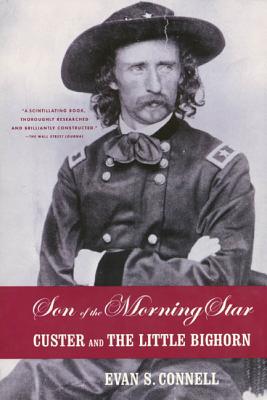 Son of the Morning Star: Custer and The Little Bighorn (Paperback)

Son of the Morning Star is the nonfiction account of General Custer from the great American novelist Evan S. Connell.

Custer's Last Stand is among the most enduring events in American history--more than one hundred years after the fact, books continue to be written and people continue to argue about even the most basic details surrounding the Little Bighorn. Evan S. Connell, whom Joyce Carol Oates has described as "one of our most interesting and intelligent American writers," wrote what continues to be the most reliable--and compulsively readable--account of the subject. Connell makes good use of his meticulous research and novelist's eye for the story and detail to re-create the heroism, foolishness, and savagery of this crucial chapter in the history of the West.

Evan S. Connell (1924-2013) received numerous prizes and awards for his writing and was the author of many books of fiction, poetry, essays, and history, including Mr. Bridge, Mrs. Bridge, The Diary of a Rapist, The Alchymist's Journal, and The Collected Stories.

“Impressive in its massive presentation of information . . . Son of the Morning Star makes good reading--its prose is elegant, its tone the voice of dry wit, its meandering narrative skillfully crafted. Mr. Connell is above all a storyteller, and the story he tells is vastly more complicated than who did what to whom on June 25, 1876.” —Page Stenger, The New York Times Book Review

“Son of the Morning Star leaves the reader astonished.” —The Washington Post