The Night Guest: A Novel (Hardcover) 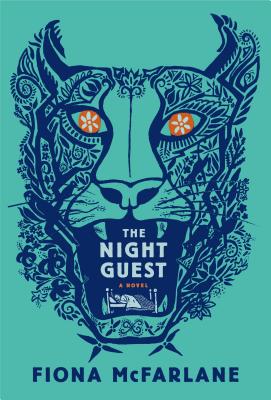 By Fiona McFarlane
Email or call for price
Out of Print - This Title is Unlikely to be Available.

A mesmerizing first novel about trust, dependence, and fear, from a major new writer

Ruth is widowed, her sons are grown, and she lives in an isolated beach house outside of town. Her routines are few and small. One day a stranger arrives at her door, looking as if she has been blown in from the sea. This woman—Frida—claims to be a care worker sent by the government. Ruth lets her in.
Now that Frida is in her house, is Ruth right to fear the tiger she hears on the prowl at night, far from its jungle habitat? Why do memories of childhood in Fiji press upon her with increasing urgency? How far can she trust this mysterious woman, Frida, who seems to carry with her own troubled past? And how far can Ruth trust herself?
The Night Guest, Fiona McFarlane's hypnotic first novel, is no simple tale of a crime committed and a mystery solved. This is a tale that soars above its own suspense to tell us, with exceptional grace and beauty, about ageing, love, trust, dependence, and fear; about processes of colonization; and about things (and people) in places they shouldn't be. Here is a new writer who comes to us fully formed, working wonders with language, renewing our faith in the power of fiction to describe the mysterious workings of our minds.

Fiona McFarlane was born in 1978 in Sydney, Australia, and holds a PhD from Cambridge University and an MFA from the University of Texas at Austin, where she was a Michener Fellow. Her work has been published in Zoetrope: All-Story, The Missouri Review, and The Best Australian Stories, and she has received fellowships from the Fine Arts Work Center in Provincetown, Phillips Exeter Academy, and the Australia Council for the Arts. Her debut novel, The Night Guest, was the winner of the inaugural Voss Literary Prize and the 2014 Barbara Jefferis Award.

“Enthralling . . . This stellar debut will haunt you--and remind you to call your mother.” —Entertainment Weekly (A-)

“A novel of uncanny emotional penetration; it had me flipping to the back cover more than once to scrutinize the author photo. How could anyone so young portray so persuasively what it feels like to look back on a lot more life than you can see in front of you? . . . A low thrum of terror builds ever so gradually as The Night Guest proceeds, and its source is the slippery connection between the mind and the world . . . What makes The Night Guest especially unnerving is the way it immerses the reader in a mind that is slowly slipping its moorings. As McFarlane depicts it, in clean, sinuous prose, you begin to lose your self by burrowing deeper inside it . . . You're in [Ruth's] head, and that head gets less and less sound as the novel progresses, but it's a strangely delightful place to be, for all the darkness surrounding it.” —Laura Miller, Salon

“I've been on a string of reading successes with FSG affiliates Faber & Faber, and this excellent novel, part psychological thriller, part wistful look at aging, is a perfect example . . . McFarlane imbues this suspenseful tale with powerful details and a touching sense of the uncertainty at the twilight of life. There's something about [The Night Guest] that lingers in my imagination, much like the tiger that Ruth hears rattling around her home. I look forward to [McFarlane's] future work.” —Megan Sullivan, Head Buyer at Harvard Book Store on her blog The Book Dwarf

“Rich and suspenseful . . . [The Night Guest] is at once a beautifully imagined portrait of isolation and an unsettling psychological thriller.” —Publishers Weekly (starred review)

“Gothic in sensibility, with a touch of magic realism, this novel feels at once like a classic and a fresh, original tale . . . Fans of psychologically oriented Scandinavian fiction should feel a familiar draw to this first novel, which is already creating significant buzz around the globe.” —Library Journal (starred review)

“Extraordinary, funny and dark. I read it twice and loved it both times.” —Evie Wyld, author of All the Birds, Singing

“With echoes of the perspective-shifting novels of Iris Murdoch, The Night Guest is a haunting tale of aging and independence.” —Nathan Rostron, Bookish Must-Read Fiction Preview: Best Books for Fall 2013

“I have read the opening paragraph of Fiona McFarlane's debut novel three times now--at first, slowly; but then with increasing, heart-pounding speed each time--and I am convinced it's one of the most enticing openings to a novel I've read all year.” —David Abrams, The Quivering Pen

“The Night Guest is an extraordinary novel. At once a tender thriller and an exquisitely constructed meditation on time and memory, it is propelled by sentence after sentence of masterful prose. With The Night Guest, Fiona McFarlane announces herself as a writer to be read, admired, and read again.” —Kevin Powers, author of The Yellow Birds

“The Night Guest is such an accomplished and polished debut. There's a delicacy and poignancy to the writing, combined with almost unbearable suspense. I love books in which I have no idea what's going to happen next!” —Kate Atkinson, author of Life After Life

“The Night Guest is deeply disturbing and exquisitely written--full of joy and melancholy--and I willingly accept that I will be haunted by its beauty and its truths for a long time to come. The story is told with a certain inevitability, yet at the same time is surprises, confounds, and torments. A rapturous, fearsome fable of grief and love.” —Susanna Moore, author of In the Cut