Indians, Fire, and the Land in the Pacific Northwest (Paperback) 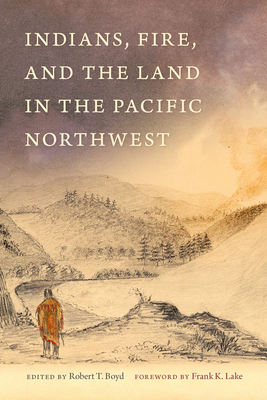 Instead of discovering a land blanketed by dense forests, early explorers of the Pacific Northwest encountered a varied landscape including open woods, meadows, and prairies. Far from a pristine wilderness, much of the Northwest was actively managed and shaped by the hands of its Native American inhabitants. Their primary tool was fire.

This volume takes an interdisciplinary approach to one of the most important issues concerning Native Americans and their relationship to the land. Over more than 10,000 years, Native Americans in the Northwest learned the intricacies of their local environments and how to use fire to create desired effects, mostly in the quest for food.

Drawing on historical journals, Native American informants, and ethnobotanical and forestry studies, this book’s contributors describe local patterns of fire use in eight ecoregions, representing all parts of the Native Northwest, from southwest Oregon to British Columbia and from Puget Sound to the Northern Rockies. Their essays provide glimpses into a unique understanding of the environment, one that draws on traditional ecological knowledge. Together, these writings also offer historical perspective on the contemporary debate over “prescribed burning” and management of public lands.

ROBERT T. BOYD, affiliated faculty in the Department of Anthropology, Portland State University, is author of The Coming of the Spirit of Pestilence: Introduced Diseases and Population Decline among Northwest Coast Indians, 1774–1874 and coeditor of Chinookan Peoples of the Lower Columbia. He lives in Portland, Oregon

“. . . by far the most comprehensive survey of North American Indian fire practices available. . . a rich broth of data and disciplines . . . The book can well serve as a model for other regions or for any part of the world where aboriginal economies, broadly interpreted, thrive.” —Stephen J. Pyne, environmental historian, Arizona State University, author of Fire in America, World Fire, and Tending Fire

"Indians, Fire, and the Land in the Pacific Northwest is a foundational work in helping people understand that fire is medicine. The work collected here has fueled scholarship and helped develop greater capacity for, and acceptance of, prescribed fire in the region. This timely updated edition builds upon the core chapters by centering the meaning of this work for Indigenous people while outlining the related research and fieldwork that came after. A must read for land managers, students of the environment, tribal members, and those committed to stewardship action." —David Harrelson (Kalapuya), Tribal Historic Preservation Officer, The Confederated Tribes of Grand Ronde


“The chapters range from northern California to British Columbia, and summarize nearly everything that is known about Pacific Northwest Indian use of fire in the environment. . . . Indians, Fire, and the Land is the most valuable resource to date on Indian burning in the region, and should provide valuable evidence for every reader for his or her next campfire debate. It should be equally usable by archeologists, anthropologists, ecologists, and historians. This is more than a ‘recommend’—buy this one—you need it for your library."—James K. Agee, Northwest Science

“Indians, Fire, and the Land should be read by every restorationist in the Pacific Northwest and Intermountain region of the Northern Rockies—it’s that important and that good. Moreover, it puts in black-and-white, what people such as Dennis Martinez and Kat Anderson have been telling the restoration community for years—namely, that Native American peoples have much to teach the rest of us about how to manage the land properly.” —David Egan, Ecological Restoration

“Indians, Fire, and the Land adds significant depth to our knowledge of how original peoples utilized fire to create unique landscapes all across the Pacific Northwest . . . Boyd’s collection brings to us for the first time a coherent treatment of the role that anthropogenic fire played in the shaping and forming of a unique ecosystem and points to the great contribution that archaeology, paleobotany, and palynology can make to our historical understanding of early human landscape manipulation." —Bruce Shelvey, Western Historical Quarterly

“Although the book’s focus is on Native American use of fire at the time of white contact, interesting observations reach back into early Indian fire use and the changes that came with Euro-American settlement and fire suppression policies. The result not only provides valuable insights into Pacific Northwest Indian history, but the book also casts light on significant questions and themes surrounding current debates over public land management policies, particularly the use of prescriptive fire.” —Robert Bunting, Oregon Historical Quarterly