Diary of a Citizen Scientist: Chasing Tiger Beetles and Other New Ways of Engaging the World (Paperback) 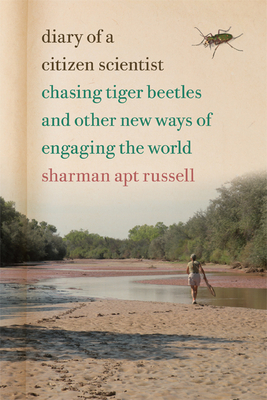 Winner of the 2015John Burroughs Medal, the 2015 WILLA Award for Best Creative Nonfiction, and finalist for the 2015 New Mexico/Arizona Book Awards

In the exploding world of citizen science, hundreds of thousands of volunteers are monitoring climate change, tracking bird migrations, finding stardust for NASA, and excavating mastodons. The sheer number of citizen scientists, combined with new technology, has begun to shape how research gets done. Non-professionals become acknowledged experts: dentists turn into astronomers and accountants into botanists.

Diary of a Citizen Scientist is a timely exploration of the phenomenon of citizen science, told through the lens of nature writer Sharman Apt Russell’s yearlong study of a little-known species, the Western red-bellied tiger beetle. In a voice both humorous and lyrical, Russell recounts her persistent and joyful tracking of an insect she calls “charismatic,” “elegant,” and “fierce.” Patrolling the Gila River in southwestern New Mexico, collector’s net in hand, she negotiates the realities of climate change even as she celebrates the beauty of a still-wild and rural landscape.

Russell’s self-awareness—of her occasionally-misplaced confidence, her quest to fill in “that blank spot on the map of tiger beetles,” and her desire to become newly engaged in her life—creates a portrait not only of the tiger beetle she tracks, but of the mindset behind self-driven scientific inquiry. Falling in love with the diversity of citizen science, she participates in crowdsourcing programs that range from cataloguing galaxies to monitoring the phenology of native plants, applauds the growing role of citizen science in environmental activism, and marvels at the profusion of projects around the world.

Diary of a Citizen Scientist offers its readers a glimpse into the transformative properties of citizen science—and documents the transformation of the field as a whole.

Sharman Apt Russell lives in southwestern New Mexico and teaches writing at Western New Mexico University and Antioch University in Los Angeles. Her books include Standing in the Light: My Life as a Pantheist (Basic Books, 2008); Hunger: An Unnatural History (Basic Books, 2005); An Obsession with Butterflies (Perseus Books, 2003); and Anatomy of a Rose: The Secret Life of Flowers (Perseus Books, 2001). Her work has been widely anthologized and translated into nine languages. Her awards include a Rockefeller Fellowship and a Pushcart Prize.

Named as one of the top ten best nature books of 2014 by GrrlScientist in The Guardian.

Russell has always been a thoughtful writer, able to examine issues as diverse as ranching (Kill the Cowboy) and hunger (Hunger: An Unnatural History) with balance and clarity. With Diary of a Citizen Scientist, her most personal book yet, Russell ranges from thoughtful examination to luminous revelation that reads like William Wordsworth or Annie Dillard, the soul shivering with ecstasy… Diary of a Citizen Scientist is a journey narrative, a chronicle of a search that changes the author along the way. Russell is a 57-year-old writer and teacher of creative writing at the college level when she decides to combat her growing sense of helplessness about the state of the world today by doing something useful. She picks tiger beetles because they are found near her Gila River Valley home, and because while they are widespread across the earth, the basics of their lives remains unknown (like where the burrows their larvae live in are located, and how long it takes the earth-bound larvae to go from egg to winged adult).

Along the way, Russell learns the thrill and tedium of field science, the excitement when something happens; the long hours when the search yields a big fat zero; and the challenges of dissecting tiny beetles, which she realizes are no greater than those of translating her fascination with tiger beetles into the minds of the third-graders who Russell's daughter teaches. Russell learns to speak entomology jargon of setae (bristles) and metanotums (body parts), and comes to understand the point of the quotidian, the mundane work of counting and collecting, taking notes and tallying data.

Most importantly though, Russell learns the power of seeing and understanding the earth at a deeper level, participating in a search for answers that is the ultimate antidote to despair. Diary of a Citizen Scientist is both a journey that transforms Russell and her understanding of herself and the planet she loves, and a clarion call to join a movement.

Diary of a Citizen Scientist is full of wit and wisdom and forays into neuroscience and psychology. Even better, the book also offers a portrait of the phenomenon of Citizen Science.

Citizen scientists are devoted amateurs. They spend large chunks of their lives cataloguing galaxies, tracking tree frogs, or identifying fossils from long-dry seas. They range from enthusiastic retirees to schoolchildren to just about every type of person you can think of. Pygmies in the Congo use specially formatted smartphones (images instead of words) to record data about deforestation and illegal poaching. Every year, of the 19,000 species newly described, citizen scientists are responsible for 60% of the descriptions.

The information about Citizen Science gives the book heft, the sense of the author joining a movement larger than herself, that will be here and growing long after she’s trapped her last tiger beetle. Several times she quotes a line by a scientist who inspires her: “You could spend a week studying some obscure insect and you would know more than anyone else on the planet.” The line goes some way to explaining what drives her.