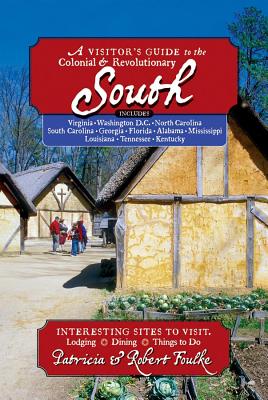 Longtime travel authors Patricia and Robert Foulke traveled throughout Virginia, Kentucky, Washington, D.C., North Carolina, South Carolina, Georgia, Florida and Mississippi to write this engaging, detailed guide that will appeal to history buffs and armchair travelers alike. From the earliest exploration of the South through the Colonial era, the French and Indian War and the Revolutionary War, up through the aftermath of the War of 1812, the authors delve into the lives of the early settlers struggling to survive in an alien wilderness, their successors who lent their expertise to fashion a new political system, and those who later fought and died to preserve their independence.

Patricia Foulke has been studying, teaching, writing, and traveling the world for almost 55 years. Along with her husband, she is also the author of guides to important Colonial and Revolutionary sites and events in the Mid-Atlantic and the South. Her travel stories focusing on history, culture, and heritage are widely published in newspapers and magazines. She lives with her husband in Lake George, New York.