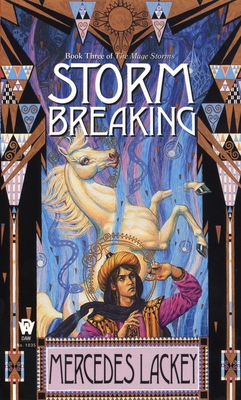 This is book number 3 in the Mage Storms series.

As Storm Breaking opens, the western allies, led by Karal, Karsite Sunpriest and delegate to the Valdemaran Court, and the Adepts Firesong and An'desha, have traveled deep into the Dorisha Plains to locate the ancient ruins of the Tower of Urtho, Mage of Silence, creator of the gryphons. Legend has it that below the Tower, deeply buried beneath the plains, is Urtho's Vault, hidden stronghold of some of the most powerful magical weapons ever devised - weapons that Urtho himself felt were too dangerous to use. With the help of the Shin'a'in plainsmen, they have successfully excavated this ancient arsenal, and risked their lives triggering one of these antique but potent tools of death to unleash a monstrous burst of mage-energy. With this explosion of magical power, Karal, Firesong, and their companions have temporarily counteracted the ever-increasing waves of the mage storms. But they know that this desperate action will not save them - they have bought themselves precious time, but are still far from a permanent solution. They know now that the mage storms are an "echo" through time of the prehistoric Cataclysm which destroyed Urtho's Tower, created the vast and barren Dorisha Plains, and permanently warped their world more than two thousand years ago. And they also know that if they don't find a way to banish these magical vibrations they will culminate in another Cataclysm - this time destroying their world for good. But the Vault is not the only thing buried for centuries below the Dorisha Plains, and camped in the ruins of what once was the workplace of the most ingenious mage their world has ever known, the desperate allies soon come to realize that their solution may lie beneath the dust at their feet. The saving of their world just might be accomplished by the work of a man who has been dead for millennia!

Mercedes Lackey is a full-time writer and has published numerous novels and works of short fiction, including the best-selling Heralds Of Valdemar series. She is also a professional lyricist and a licensed wild bird rehabilitator. She lives in Oklahoma with her husband, artist Larry Dixon, and their flock of parrots. She can be found at mercedeslackey.com.