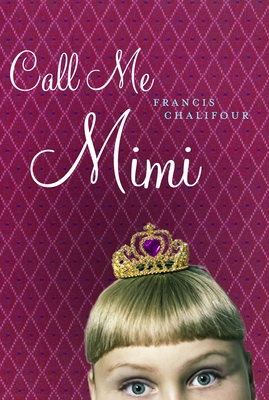 
Email or call for price.
Mimi loves flowers, crystal chandeliers, kittens, Céline Dion’s voice, the color pink, swaths of satin, the Queen of England, and chocolate. Far, far too much chocolate. She craves beauty and her own overweight self is emphatically not beautiful, at least in her own eyes. And despite her size, she doesn’t feel whole because all she knows about her father is that he was a sperm bank donor seventeen years before. Mimi is a fractured soul.

Although she knows it could be disastrous, she is drawn to her school’s prom because it will be held in a beautiful ballroom and, for once, she’ll be able to dress up. But her instincts prove to be right and, after merciless bullying, she flees in tears.

Mimi knows that she needs to take charge of herself to find a person she can love within her self-imposed wall of weight. She leaves her doting mother and Montreal behind and heads to Toronto to find her father. What she finds is far more important than anything she could possibly have imagined.

Francis Chalifour’s ability to bring the unforgettable Mimi to life makes this a novel that will touch the reader’s funny bone and heart.
Francis Chalifour was born and raised in Quebec and now lives in Toronto, where he teaches grades seven and eight. He has a Master’s degree in Education, specializing in the influence of the mourning process on children’s learning. Chalifour has been writing for most of his life. His first published work was the French novel Zoom Papaye. His first novel in English was After, which was shortlisted for a Governor General’s award. He has contributed articles to The Walrus, Maclean’s, Le Devoir, La Presse, and Professionally Speaking. Chalifour has also hosted a radio program and worked for TFO/TVO.
Praise for After:
“A compelling, beautifully-written account of a family touched by
a father’s suicide. In the character Francis, we have a voice that is candid, honest, funny and heartbreaking.”
— Governor General’s Award Jury

“Chalifour’s prose gives … a full and nuanced picture of grief in all its manifestations….” — The Globe and Mail