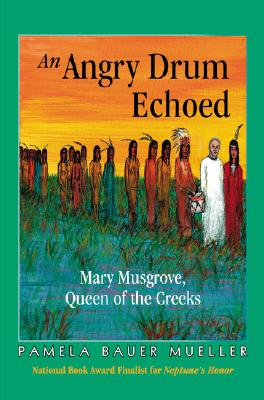 As Pocahontas was to Jamestown and Sacajawea was to the Lewis and Clark expedition, so was Mary Musgrove to General James Oglethorpe and the burgeoning Georgia colony. Not much has been written about one of the leading characters in the founding of Georgia, but now Pamela Bauer Mueller, author of five books for young people, introduces AN ANGRY DRUM ECHOED: Mary Musgrove, Queen of the Creeks. This historical novel, due out in September, tells a fascinating story that’s sure to capture readers’ attention.

Born “Coosaponakeesa” to a Creek mother and an English father about 1700, Mary Musgrove successfully lived in two very different worlds: the Indian and the English. Through her influence with the Indian tribes, Mary encouraged the chiefs to meet with Oglethorpe in Savannah, leading to the peaceful establishment of an English colony in Indian Territory.

Although she won the esteem of the English settlers, she eventually became a thorn in the side of the newly formed colonial government. After ten years without pay for her diplomatic and interpretive services, she led her Creek tribesmen in a relentless march through the streets of Savannah to demand justice.

Mary Musgrove triumphed over savage discrimination, unimaginable personal adversity and an unrequited love for the founder of Georgia. As General Oglethorpe’s interpreter and emissary to the Indians, she smoothed the path to cooperation between the Creeks and the colonists, perhaps single-handedly insuring the survival of the colony of Georgia. Arguably the most important woman in the history of Georgia, Mary Musgrove guided the Creek nation through the treacherous waters of international intrigue during the dramatic conquest of a hemisphere.

Pamela Bauer Mueller was raised in Oregon.  She has worked as a flight attendant, commercial model and actress, English and Spanish teacher and a U.S. Customs Inspector.  She now lives on Jekyll Island Georgia with her husband Michael and their cats Sukey Spice and Morgan Maurice.

Pamela's children and young adult books have awarded her the 2006/2008and the 2009Georgia Author of the Year titles, three Mom's Choice and Children’s Choice gold medals, the Independent Publisher Gold Book awards and other national awards with Writer's Digest and ForeWord magazines.  In her sixth historical novel, she introduces us to two female Civil War spies, Antonia Ford and Pauline Cushman, and their true stories of deep patriotism, deception and duplicity.