Alone: Orphaned on the Ocean (Hardcover) 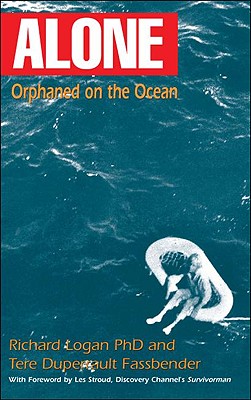 Terry Jo Duperrault was 11 when her family was murdered at sea aboard a chartered sailboat off the coast of Florida. She jumped overboard just in time to escape. Surviving four days on a cork float in the middle of the ocean, Terry Jo's rescue pictures graced LIFE Magazine soon after she was found. This is the first time Terry Jo, now known as Tere Duperrault Fassbender, has been able to fully tell her story. In September 1988 Oprah Winfrey reunited her with the freighter Captain who saved her, but even then, she was not healed enough to reveal what it took to survive for four days adrift and alone at sea. Co-authored by psychologist and survival expert Richard Logan, readers delve into the details of how a little girl survived the murder of her family; the gradual collapse of the small cork float she used to keep afloat while guarded by a pod of whales; and the aftermath and the reclamation of life. Alone: Orphaned on the Ocean is the ultimate inspirational tale of good.

Richard D. Logan PhD is a nationally recognized expert in the psychology of solitary survival. He has been a guest on A&E and Discovery Channel. Tere Duperrault Fassbender was 11 when she was nearly swallowed by the ocean during four days at sea. Her rescue in 1961 was covered worldwide. She spent her life guarding the water that threatened her as a child.