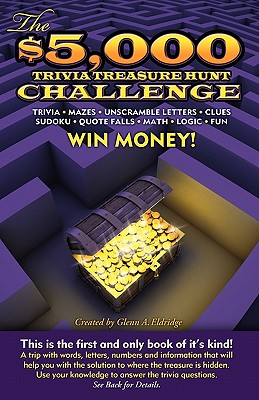 By Glenn A. Eldridge


Usually Ships in 1-5 Days
This is an unusual book. In fact, it's the first book of its kind, challenging the reader to locate a treasure of $5,000 through trivia, games and puzzles. The whole book is a new concept, because of the fact that the money will be given away to one of the successful challengers. What needs to be discovered is the place, a number, the city and the state where the treasure is located. Clues will be present throughout the journey, depicted by words, letters and numbers. Most of all, it is an entertaining adventure, starting with trivia questions that are fun and informative. At first glance, the reader may wonder where the words to the word search are. One may also wonder where the mazes are, but both will be evident and appear when you get to that point. More trivia will assist the challenger through the pages. The book is your road map to solving the mystery. It contains numerous kinds of puzzles including: quote falls with clues, figuring out numbers--not only through math, but also through ingeniously clever means, and creative sudoku puzzles like you have never seen before. Both logic and common sense should be used in order to complete the puzzles and find the $5,000 treasure. The adventure can be done solo, but I promise, it will be much more amusing if you do it with family, friends or even college buddies, for it's the going, not the getting there that's good. The trivia alone is worth the price of admission, with 50 pages covering movies, music, history, sports and many other topics, as well as, individual subjects like The Beatles, Elvis, Seinfeld and others. The trivia runs throughout the puzzles and games, giving the reader clues along the way to find the location of the $5,000 treasure. Entry form is included.
Glenn A. Eldridge is the author of this first, one of a kind trivia and puzzle book. This book has taken almost three years to get from an idea in his head to the very pages you will be holding in your hands. It has worked its way up to a challenge, but Glenn's hope is that this book can be as informative as it can be fun. Families, friends and students can be brought together to play the trivia, solve the puzzles and find the treasure. Glenn grew up in the Bronx, New York. His love of trivia of must have gotten started when for 35 cents he use to go to the movie theater at the corner of his street. Glenn had various jobs, from working in a drug store and a supermarket to selling soda in Yankee Stadium. He went to college in Alamosa, Colorado for a year and moved back to New York and became an apprentice in his father's business installing pressed tin ceilings. He started in that business after he came home from being at the original Woodstock Concert. He has since, moved his father's business to Houston, Texas where he now manufactures the pressed tin ceilings panels and attended the University of Houston. He has done stand up comedy on open mic nights and wrote a short play in 2008 called, "The Many Loves of Bert". He loves chess, scrabble and puzzles, which helped him come up with his newest endeavor, the creation of The $5,000 Trivia Treasure Hunt Challenge.