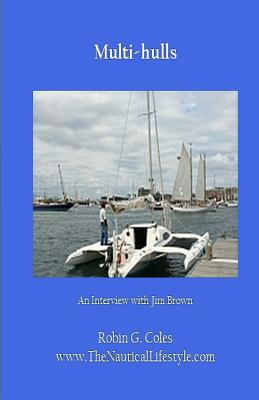 
Usually Ships in 1-5 Days
An interview with Jim Brown all about Multihulls. Robin G. Coles interviews James Brown about Multihulls; catamarans, trimarans, and proas. This was a two hour interview and chock-full of great stories. To learn more read about these top tips included: 1. The real difference between multihulls and monohulls is people; people willing to embrace the multihull concept are really embracing a different attitude toward the sea. 2. One disadvantage of a multihull is limited load carrying capacity. Consider what you're going to take with you. You sometimes have to decide whether to go against the wind or bear off in order to reduce the pounding, which is particularly bad in big catamarans. 3. A trimaran has one large central hull and two smaller outer or outrigger hulls. A trimaran can run fine on one engine. There is a place on a trimaran bow to attach the head or jib stay. 4. A catamaran doesn't have a bow. It usually has twin rudders and you have to hook them together. A catamaran's stirring linkages are complex and expensive. The catamaran has two centerboards/trunks; a trimaran has only one. 5. A catamaran's widely spaced hulls can straddle a wave crest. A trimaran's float, or outer hull, is not as far from the main hull as the two catamaran hulls are from each other, so there's less room to straddle in a trimaran. 6. The catamaran has to drag its two hulls through the tack. A trimaran, properly designed, only has to drag one hull through the tack. For that reason, trimarans are more maneuverable than catamarans. It's easier to tack them. 7. Trimarans are better upwind-they communicate with the pilot in a more direct manner. A trimaran will tell you in no uncertain terms that you're driving the daylights out of your boat because the lee floats, the bow of the downwind outrigger, will go right through the crest. That's normal behavior when driving the boat hard to windward. 8. Trimarans are safer than catamarans. They are less likely to capsize, and, if they do, trimarans are habitable when capsized and catamarans are not. When a trimaran capsizes, its outer hulls form giant airlocks that hold the main hull up high enough to make it habitable even when the boat is upside down. You can cut a hole in the hull or open the safety hatch in a capsized trimaran to get oxygen inside the main hull while the vessel is capsized. 9. Proa has one main hull and only one smaller outrigger hull on one side of the boat, usually to windward. 10. Hydrofoils are racing trimarans fitted with J, T, and/or ladder foils; hydrofoils are underwater wings that accomplish the same thing in water that airplane wings do in air.