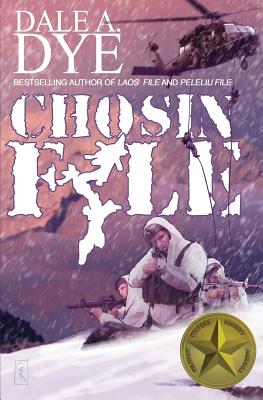 This is book number 3 in the Shake Davis series.

Chosin File is a 2013 gold medal winner from the Military Writers Society of America Nuclear saber-rattling in North Korea has created international palpitations and some unlikely partnerships in an effort to keep communist loose cannons from causing a war that no one wants and everyone fears. The CIA calls on clandestine contacts in neighboring China to run a dark--and wholly unauthorized--reconnaissance mission over North Korea from a top-secret drone base along the Yalu River. All is well and under international radar until Gunner Shake Davis' best friend goes missing on a mission near the infamous Chosin Reservoir to check on a tip that the North Koreans are up to something sinister around the infamous Chosin Reservoir. That brings Marine Gunner Shake Davis out of retirement once again to locate his buddy on a risky trek through the snow-blown mountains surrounding the Korean War battle site where an earlier generation of Marines fought a classic withdrawal that became an iconic chapter in military history. While Shake is on his risky mission, the North Korean Supreme Leader suddenly dies and the entire world goes on high alert to see what might happen next in Pyongyang. That puts serious pressure on Shake and his South Korean allies who have discovered--and must deter--a potentially world-shattering North Korean weapon that threatens the very fabric of modern computer-based societies. It's a high-stakes game and the clock is ticking as an international team of technical experts and military special operators launch a desperate search that culminates in a deadly confrontation in the Korea Straits in the midst of a howling storm.