Daughter of the Razor: An Australian True Crime Story (Paperback) 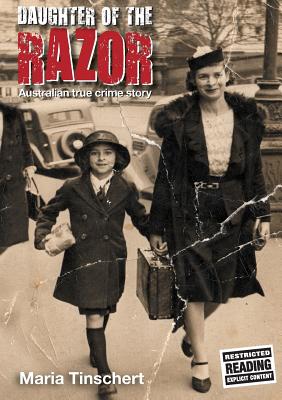 An unforgettable Australian true crime story of prostitution, sexual, physical and mental abuse and violence inside the walls of family silence in the slums of Sydney in the 1930's.

Maria shares her story of growing up as the daughter of a woman connected to Sydney's infamous Razor Gang. Before the age of 11 Maria was introduced to the world of prostitution by her mother who was in the sister hood of Kate Leigh and Tilly Devine.

This story would of never have been told had it not been for another violent crime perpetrated on the now adult Maria many years later which led her to break the code of silence.

Now 84 years of age Maria is an inspiring survivor who works every day of the year as a volunteer Community Care Counsellor helping others. Maria does motivational speaking on all aspects of her life, with the aim of inspiring people to take responsibility for their decisions and actions, no matter what unfortunate beginnings that anyone of us has endured.

Daughter of the razor is a shocking story in itself - but it is an even greater story of survival. It is it is powerful and moving and tells of the triumph of the human spirit of a little girl in her rise out of depravity, sadism and debauchery. It is a story which has been an incredible lifetime in the making.