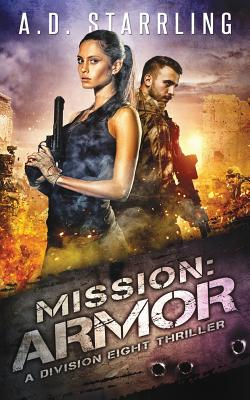 This is book number 2 in the Division Eight Thriller series.

A man tortured by his past. A woman determined to save him. A deadly assignment that threatens to rip them apart.

Eight months after falling in love with Alex Slade, the Army Ranger she rescued from an infamous drug cartel, U.S. Marine Lieutenant Vivian Thorpe is approached to be his second in command of ARMOR, the first team in a new shadowy black ops section called Division Eight. She agrees but has one condition: she will only give ARMOR six months.

With the deadline fast approaching, the pair find themselves heading to Africa with their team. Their mission: to assist an undercover CIA operative who may have unearthed the hottest lead on African arms trafficking in decades. When they fail to make contact with the agent, ARMOR discovers a chain of bloody evidence that leads them across the dark continent on the trail of a notorious arms dealer who may prove to be their toughest adversary yet.

With their enemy always one step ahead of them, Alex and Vivian must ignore the growing storm inside their hearts and call on all their strength and wit to lead ARMOR on one of the most dangerous assignments they have ever undertaken.

Will they survive long enough for Vivian to convince Alex that she is the perfect woman for him?

Mission: Armor is the second novella in the romantic military thriller series Division Eight from award-winning author AD Starrling. If you like action-packed, sexy stories with strong-willed heroes and heroines, then you'll love this gripping new black ops series.

Other books and stories by AD Starrling

The Other Side of the Wall