The Things Our Fathers Saw - Vol. 3, The War In The Air Book Two: The Untold Stories of the World War II Generation from Hometown, USA (Paperback) 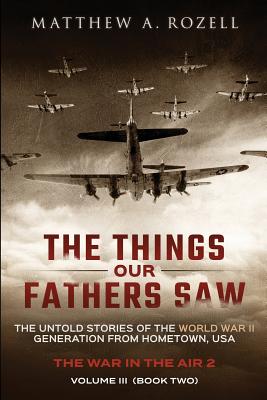 The Things Our Fathers Saw - Vol. 3, The War In The Air Book Two: The Untold Stories of the World War II Generation from Hometown, USA (Paperback)

Dying for freedom isn't the worst that could happen. Being forgotten is.

(The War in the Air Book Two)

--"After the first mission Colonel Davis told us, 'From now on you are going to go with the bombers all the way through the mission to the target.' It didn't always work, but that was our mission--we kept the Germans off the bombers. At first they didn't want us, but toward the end, they started asking for us as an escort, because we protected them to and from the missions."-Clarence Dart, Tuskegee Airman, WWII

How soon we forget. Or perhaps, we were never told. That is understandable, given what they saw.

-- Someone in the PoW camp] said, 'Look down there at the main gate ', and the American flag was flying We went berserk, we just went berserk We were looking at the goon tower and there's no goons there, there are Americans up there And we saw the American flag, I mean--to this day I start to well up when I see the flag." -Sam Lisica, former prisoner of war, WWII

By the end of 2018, fewer than 400,000 WW II veterans will still be with us, out of the over 16 million who put on a uniform. But why is it that today, nobody seems to know these stories?

Maybe our veterans did not volunteer to tell us; maybe we were too busy with our own lives to ask. But they opened up to the younger generation, when a history teacher told their grandchildren to ask.

This book brings you the previously untold firsthand accounts of combat and brotherhood, of captivity and redemption, and the aftermath of a war that left no American community unscathed.

As we forge ahead as a nation, we owe it to ourselves to become reacquainted with a generation that is fast leaving us, who asked for nothing but gave everything, to attune ourselves as Americans to a broader appreciation of what we stand for.

This book should be a must-read in every high school in America. It is a very poignant look back at our greatest generation; maybe it will inspire the next one. Reviewer, Vol. I

This book picks up where the previous 'War in the Air' volume left off, in the air war over Europe.