The Bulge and Beyond: The Things Our Fathers Saw-The Untold Stories of the World War II Generation-Volume VI (Paperback) 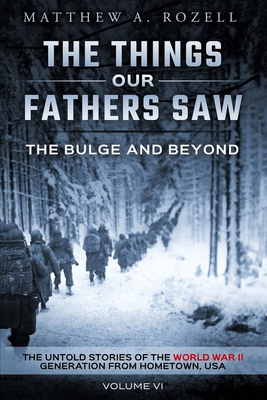 The Bulge and Beyond: The Things Our Fathers Saw-The Untold Stories of the World War II Generation-Volume VI (Paperback)

THE NEW BOOK from MATTHEW ROZELL in the best-selling 'THE THINGS OUR FATHERS SAW' World War II oral history series.

In THE BULGE AND BEYOND, you will be with the soldiers going into the heart of the bloodiest single battle fought by the US Army in American history, the so-called 'Battle of the Bulge'.

From the Great Depression to Pearl Harbor, from high school to the combat zone, from boot camp to the end of the Third Reich and Imperial Japan, here are more of the stories that we can't afford not to hear, from a vanishing generation speaking to America today.

In 'THE BULGE AND BEYOND', you will be among the columns of young, tired men slogging it out in the malevolent forest, cold, dark, and medieval. You will walk the with the scout to his targeted outpost. You will lay in a freezing minefield by day, hoping to elude the sniper's bullet, and forever experience the complete inability to ever again feel warm. Nineteen thousand American GIs never saw their mothers again; tens of thousands more were wounded or taken prisoner in Hitler's last great counter-offensive that shocked the world. In 'THE BULGE AND BEYOND', our veterans sit down and speak to you directly about what they experienced. World War II brought out the worst in humanity, but it also brought out the best; in these narratives you will draw your own lessons. Here are the stories that a special generation of Americans told us for the future when we took the time to be still, to listen, and to draw strength.

- "Hell came in like a freight train. I heard an explosion and went back to where my friend was. His legs were blown off-he bled to death in my arms."

Maybe our veterans did not volunteer to tell us their stories; perhaps we were too busy with our own lives to ask. But they opened up to a younger generation, when a history teacher taught his students to engage.

As we forge ahead as a nation, do we owe it to ourselves to become reacquainted with a generation that is fast leaving us, who asked for nothing but gave everything, to attune ourselves as Americans to a broader appreciation of what we stand for?

This is the sixth book in the masterful WWII oral history series, but you can read them in any order.

It's time to listen to them. REMEMBER how a generation of young Americans truly saved the world.

Or maybe it was all for nothing?

Dying for freedom isn't the worst that could happen. Being forgotten is.

- "A must-read in every high school in America. It is a very poignant look back at our greatest generation; maybe it will inspire the next one."