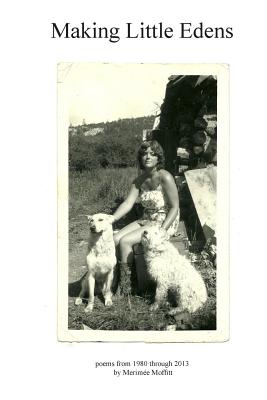 By Merimée Moffitt
$15.00
On Our Shelves Now

This first collection of poems, presented in double decades, reflects family issues, social upheavals, and experiences of living wild in northern New Mexico. As an expat from the West Coast, so-called hippies (desperadoes according to the late R. C. Gorman) are presented as characters worthy of note in the beauty of natural settings along with a variety of ancie os and others. This work is vivid, visual and sensual, sometimes ragingly political, and as easily accessible as smoothly written stories. Merim e Moffitt's voice has the cadence and economy of contemporary verse with the power and angst of a woman breaking the rules by saying what others wouldn't dare.

Merim e's literary influences are clearly the women poets and writers of the fifties who rocked the canon by using women's issues as fodder for good poetry. The book contains a broad range of styles, tones, themes, and attitudes. From free verse to villenelles, pantoums and ghazals, pictures of life in the Sixties through the early millennium are artfully crafted.

Merim e spent twenty years teaching mostly writing classes in secondary creative writing classes and Central New Mexico Community College where she encouraged young and/or new poets to write and to bring their work into the community. Her former students have published their books and one, Jessica Helen Lopez, went on to become our second Poet laureate of Albuquerque. Other of her students made their marks in the slam scene and writing programs at UNM.