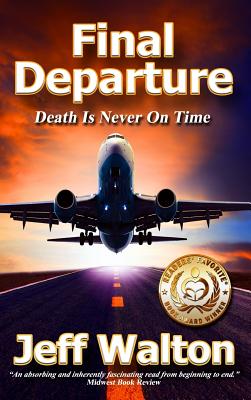 "An absorbing and inherently fascinating read from beginning to end..." - Midwest Book Review

"An irresistible read... I was fascinated by Walton's expert sleuthhound work...his meticulous research and documentation are neatly compressed in each chapter..." Ric P, Chief of Operations, CIA Counterterrorist Center (Retired)

"A must read for adults of all ages Final Departure is a sobering and introspective look at life, death and beyond..." Mark Clookie, Director, NCIS (Retired)

DEATH IS NEVER ON TIME

NCIS veteran Dan Lucas is a man of few words. He spent a career keeping his nation's secrets safe and his personal life-including his faith-private. But when a routine flight home turns into a chaotic nightmare when a lethal storm strands Dan and thousands of passengers inside a dark and clammy airport terminal - he's forced to act.

Dan is secretly carrying a massive cache of information that he never planned to share with anyone. But that all changes when an atheist professor chooses the seat next to him... and sparks begin to fly. A caustic battle of the minds erupts between the seasoned spy catcher and the cynical secular Jew that grinds on into the wee hours of the night. What does Dan reveal to the tenured academic during a gut- wrenching night of mayhem and death? Can it save the professor before it's too late?

Their all-night marathon ends with a sudden series of crushing events. Who dies and who survives? What unbelievable miracle is the final result?