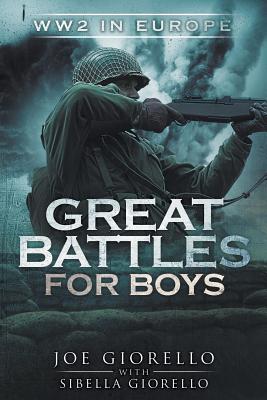 "This book should be in school libraries everywhere. It is a treasure trove of information that is engagingly written ...." Top 500 Amazon Reviewer

Great Battles for Boys is the best-selling history series that sends young readers into the fight. Learn about military leaders, weapons, and strategies.

Want Boys to Read Books? Give them books they WANT to read

Filled with amazing historic photographs, maps, and short, powerful chapters, Great Battles for Boys captures the attention of even reluctant readers. History leaps off the page through the blood, sweat, and sacrifice of men at war. Learn how these conflicts shaped the world, and why "Freedom isn't free."

In this episode, the story opens with Hitler's rise to power in 1930s Germany, followed by his devastating invasion of Poland that launched World War II. In chronological order, the crucial battles storm across Europe and into North Africa, including:

For many years, Joe Giorello has taught a highly popular middle-grade class in the Seattle area called "Great Battles for Boys." His best-selling book series is based on that class. Contact him on his website, www.greatbattlesforboys.com.