The Memo: Twenty Years Inside the Deep State Fighting for America First (Paperback) 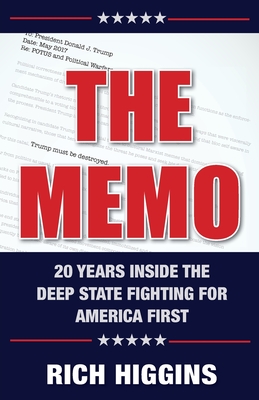 After three short months in 2017 serving on the National Security Council under President's Trump National Security Advisor H.R. McMaster, Rich was fired for telling the truth. He sounded the alarm on the Deep State coup to remove President Trump and of the subversives within the ranks. Rich set it all down in his famous memo - POTUS and Political Warfare. And for this, he paid for it with his job.

At the time, Rich was labeled as a "conspiracy theorist" but as events played out over the following three years, Rich has been fully vindicated.

The Memo is the riveting story of how Rich Higgins' twenty year career fighting for America First within the bowels of the DoD and Pentagon bureaucracy enabled him to discern - well before anyone else - the Deep State's efforts to stop and ultimately remove the President from office. No one was more bold - or more frighteningly accurate - in anticipating the ferocity of the Deep State's assault on the Constitution and President Trump.