Writing the Land, Writing Humanity: The Maya Literary Renaissance (Perspectives on the Non-Human in Literature and Culture) (Paperback) 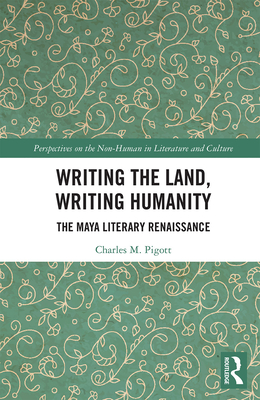 Writing the Land, Writing Humanity: The Maya Literary Renaissance (Perspectives on the Non-Human in Literature and Culture) (Paperback)

The Maya Literary Renaissance is a growing yet little-known literary phenomenon that can redefine our understanding of "literature" universally. By analyzing eight representative texts of this new and vibrant literary movement, the book argues that the texts present literature as a trans-species phenomenon that is not reducible only to human creativity. Based on detailed textual analysis of the literature in both Maya and Spanish as well as first-hand conversations with the writers themselves, the book develops the first conceptual map of how literature constantly emerges from wider creative patterns in nature. This process, defined as literary inhabitation, is explained by synthesizing core Maya cultural concepts with diverse philosophical, literary, anthropological and biological theories. In the context of the Yucatan Peninsula, where the texts come from, literary inhabitation is presented as an integral part of bioregional becoming, the evolution of the Peninsula as a constantly unfolding dialogue.

Charles M. Pigott is an Assistant Professor of Literature at UDLAP and Quondam Fellow of Hughes Hall (Cambridge). His other publications include "Maize and Semiotic Emergence in a Contemporary Maya Tale" (Tapuya), "The Last Inca: Hegemony and Abjection in an Andean Poetics of Discrimination" (Modern Languages Open) and "Ecological Ethics in Andean Songs" (Studies in American Indian Literatures).