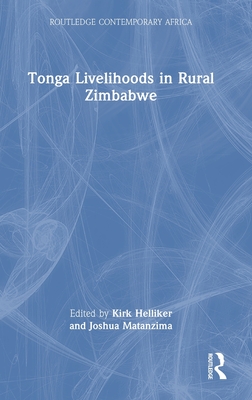 Based on extensive original fieldwork, this book examines the complex and diverse livelihoods of Zimbabwe's Tonga people as they have developed over time, including in the wake of the country's post- 2000 political and economic crises.

Despite being endowed with natural resources, the northwest region of Zimbabwe inhabited by the Tonga people is one of the most marginalised and underdeveloped parts of the country, neglected by both colonial and postcolonial governments. The Tonga- speaking people are a minority ethnic group that settled on either side of the Zambezi River around 1100 AD and remain deeply dependent on the river for their socio- economic livelihoods. This book reflects on the challenges faced by the Tonga people, from poor infrastructure, health and education facilities, to the issues caused by soil infertility and extremely low rainfall, which have been exacerbated by climate change. Many Tonga people were displaced by the construction of the Kariba Dam in the 1950s, and their access to the region's natural resources has been restricted by successive governments. Showcasing the research of Zimbabwean scholars in particular, this book not only reflects on the vulnerabilities faced by the Tonga, but it also looks beyond these, to the livelihood practices that are thriving despite these challenges, and the ways in which livelihoods intertwine with Tonga culture and society more broadly.

Overall, this book highlights the resilience of the Tonga people in the face of years of politico- economic crisis and will be an important contribution to research on livelihoods, ethnic minorities and rural development in Africa.

Kirk Helliker is a research professor in the Department of Sociology at Rhodes University in South Africa, where he heads the Unit of Zimbabwean Studies, which he founded. He published widely on Zimbabwean history, politics and society and has supervised a significant number of PhD and MA students. Joshua Matanzima is a PhD candidate in Anthropology, at La Trobe University, Australia. His research interests include anthropology of landscapes, human-wildlife conflicts, mining-induced displacements and borderland economics with special emphasis on the Zambezi Valley. He is co-editor of Livelihoods of Ethnic Minorities in Rural Zimbabwe.