The Empress of the Clouds (Paperback) 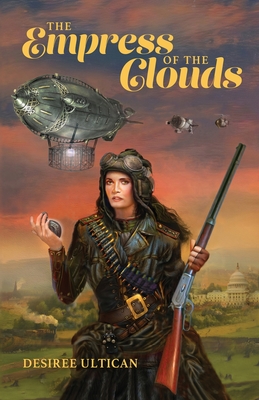 In March 1896, Widow Evaline "Evvy"Amstel has been left with a tremendous debt―before he was murdered, her husband had promised to build and deliver a revolutionary airship, The Empress of the Clouds, to Eramus Marchand, an embittered Southern millionaire who resents the fact that the damned Yankees won the Civil War. Now that Amstel is dead, no one in Joplin, Missouri, a zinc/lead mining boomtown, knows where the Empress is . . . or if it even exists. Count Ferdinand von Zeppelin also has a stake in finding the airship. He has accused Evvy's husband of stealing the original designs from him and is determined to recover the ship in order to build up Germany's military might.

Evvy takes over her husband's failing airship company and the company thrives for a time. But Marchand is fanatical in his quest to find the Empress―to arm it with a weapon of mass destruction at a pivotal moment in history and instigate anarchy. He'll stop at nothing to achieve his vision and Evvy is proving to be a huge impediment. It's up to her and local deputy Sean McTavish to find the airship before Marchand or Zeppelin does, because the future of the United States is in peril.

The Empress of the Clouds is a steampunk adventure. This alternative history tale features a spunky, resourceful heroine who doesn't allow adversity and evil to overpower her but seizes control of her own destiny.