The Man, The Record: The Life and Times of Clifford J. Dickman (Hardcover) 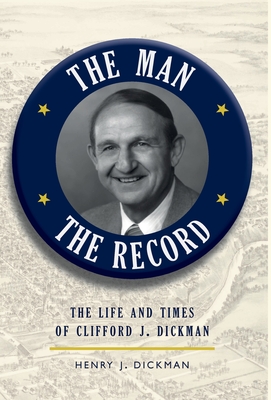 Clifford Dickman will tell you that the American Dream is not some overplayed clich -it's a wondrous reality arising from opportunity, grit, and virtue. His story provides the proof.

Born and raised during the Great Depression on a farm outside Richmond, Indiana, young Dickman learned to cope with great suffering after the devastating loss of his father. Yet thanks to his iron perseverance and athletic talent, he earned a scholarship to Earlham College and became a record-setting four-sport competitor. After an overseas tour in the Army, Dickman returned to Richmond, where he and his wife Martha Jane raised a family of eight children.

Dickman quickly established himself as a fixture in the Richmond community. At 28 years old, he became the owner of Kesslers Team Sports, a sporting-goods retailer and distributor for high schools and colleges. Over the years, Dickman and his sons expanded Kesslers's local storefront into America's largest dealer of team sporting goods. Notwithstanding his devotion to business and family, Dickman poured himself into leading service clubs, chairing countless fundraising initiatives, and refereeing high school sports across Indiana.

Dickman's entrepreneurial spirit and passion for service propelled him to lead his community as mayor of Richmond. During his tenure, Dickman navigated the Great Blizzard of 1978, battled against the state and federal governments, negotiated labor peace, and grappled with the statewide Chemscam scandal. As his political star rose, he took on engagements across Indiana: he served as president of the Indiana Association of Cities and Towns, acted as a trusted counselor to two governors, and ran for Congress on a promise to bring Hoosier values to our nation's capital.

Throughout the highs and lows of Dickman's life, his foundation has been his Catholic faith and his family, which now includes over 100 descendants and spouses. The culmination of his life experiences-as a farmer, athlete, businessman, community leader, husband, and father-has done no less than shape him into the man that he is: a distinctly all-American figure in his all-American, Richmond home. His story shows all that is possible in our country and reminds us of the timeless path to a life well lived.