Unforgetting: A Memoir of Family, Migration, Gangs, and Revolution in the Americas (MP3 CD) 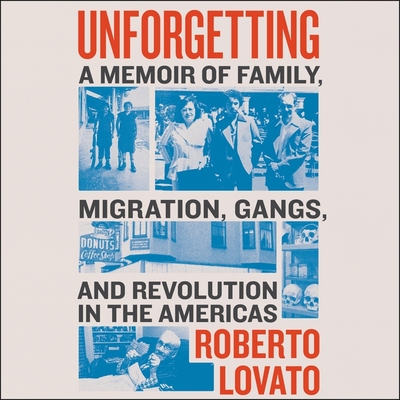 Unforgetting: A Memoir of Family, Migration, Gangs, and Revolution in the Americas (MP3 CD)

By Roberto Lovato (Read by)

A The Millions Most Anticipated Book of the Year

Gripping and beautiful. With the artistry of a poet and the intensity of a revolutionary, Lovato untangles the tightly knit skein of love and terror that connects El Salvador and the United States. --Barbara Ehrenreich, author of Natural Causes and Nickel and Dimed

An urgent, no-holds-barred tale of gang life, guerrilla warfare, intergenerational trauma, and interconnected violence between the United States and El Salvador, Roberto Lovato's memoir excavates family history and reveals the intimate stories beneath headlines about gang violence and mass Central American migration, one of the most important, yet least-understood humanitarian crises of our time--and one in which the perspectives of Central Americans in the United States have been silenced and forgotten.

The child of Salvadoran immigrants, Roberto Lovato grew up in 1970s and 80s San Francisco as MS-13 and other notorious Salvadoran gangs were forming in California. In his teens, he lost friends to the escalating violence, and survived acts of brutality himself. He eventually traded the violence of the streets for human rights advocacy in wartime El Salvador where he joined the guerilla movement against the U.S.-backed, fascist military government responsible for some of the most barbaric massacres and crimes against humanity in recent history.

Roberto returned from war-torn El Salvador to find the United States on the verge of unprecedented crises of its own. There, he channeled his own pain into activism and journalism, focusing his attention on how trauma affects individual lives and societies, and began the difficult journey of confronting the roots of his own trauma. As a child, Roberto endured a tumultuous relationship with his father Ram n. Raised in extreme poverty in the countryside of El Salvador during one of the most violent periods of its history, Ram n learned to survive by straddling intersecting underworlds of family secrets, traumatic silences, and dealing in black-market goods and guns. The repression of the violence in his life took its toll, however. Ram n was plagued with silences and fits of anger that had a profound impact on his youngest son, and which Roberto attributes as a source of constant reckoning with the violence and rebellion in his own life.

In Unforgetting, Roberto interweaves his father's complicated history and his own with first-hand reportage on gang life, state violence, and the heart of the immigration crisis in both El Salvador and the United States. In doing so he makes the political personal, revealing the cyclical ways violence operates in our homes and our societies, as well as the ways hope and tenderness can rise up out of the darkness if we are courageous enough to unforget.