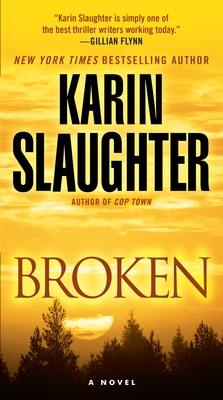 This is book number 4 in the Will Trent series.

“Ahh, Karin Slaughter does flawed characters so well!! There are dirty cops with histories, indigent students trying to make a buck, more dirty cops who are trying to leave the past behind, the widowed medical examiner turned ER doc, and to top it all off there is Detective Will Trent, dyslexic, orphaned and passed around from foster home to foster home, whose challenges allow him to see things more clearly. In Broken, Trent, in his methodical, quiet, brilliant manner manages to break a criminal investigation of two murdered students in Grant County wide open;one that is being covered up from the top down. Once you start this, you will not want to stop reading!”
— Karen Ford, McLean & Eakin Booksellers, Petoskey, MI

Karin Slaughter’s internationally bestselling novels are as notable for their vivid portraits of lives shadowed by loss and heartbreak as they are for their dramatic criminal investigations. Broken features the return of her most compelling characters and introduces memorable new ones in a tale of corruption, murder, and confrontation that will leave more than one life . . .

While the police force investigates the murder of a young woman pulled from a frigid lake, Trent investigates the police force, putting pressure on Adams just when she’s already about to crack. Caught between two complicated and determined women, trying to understand Linton’s passionate distrust of Adams, the facts surrounding Chief Tolliver’s death, and the complexities of this insular town, Trent will unleash a case filled with explosive secrets—and encounter a thin blue line that could be murderous if crossed.

Spellbinding and keenly paced, Broken is Karin Slaughter at her best. Here is an unforgettable story of raw emotions, dangerous assumptions, the deadly and layered game of betrayal, and a man’s determination to expose the most painful of human truths—no matter how deeply they’re hidden . . . or how devastating.

“Addictive . . . Slaughter is a terrific writer, and she keeps the emotional tension high throughout.”—The Atlanta Journal-Constitution

“This chilling mystery is just begging to be read in one sitting.”—Cosmopolitan