Germany: Memories of a Nation (Paperback) 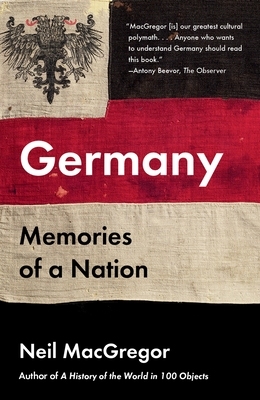 Germany: Memories of a Nation (Paperback)

For the past 140 years, Germany has been the central power in continental Europe. Twenty-five years ago a new German state came into being. How much do we really understand this new Germany, and how do its people understand themselves?

Neil MacGregor argues that, uniquely for any European country, no coherent, overarching narrative of Germany’s history can be constructed, for in Germany both geography and history have always been unstable. German history may be inherently fragmented, but it contains a large number of widely shared memories, awarenesses, and experiences; examining some of these is the purpose of this book. MacGregor chooses objects and ideas, people and places that still resonate in the new Germany—porcelain from Dresden and rubble from its ruins, Bauhaus design and the German sausage, the crown of Charlemagne and the gates of Buchenwald—to show us something of its collective imagination. There has never been a book about Germany quite like it.

Neil MacGregor was Director of the National Gallery, London from 1987 to 2002 and of the British Museum from 2002 to 2015. His previous books include A History of the World in 100 Objects and Shakespeare’s Restless World, between them translated into more than a dozen languages. For his work on the BBC Radio 4 series, British Museum exhibition and book Germany: Memories of a Nation, he was awarded (in Germany) the Friedrich Gundolf Prize, the Goethe Medal and the German National Prize and (in the UK) the British Academy's Nayef Al-Radhan Prize for Transcultural Understanding. He is now Chair of the Steering Committee of the Humboldt Forum in Berlin.

“Striking. . . . Germany: Memories of a Nation is deeply felt, carefully conceived, and an important addition to any consideration of the shape not only of modern Germany but of Europe as a whole.” —The Economist

“Fascinating. . . .The book’s high-quality allows for its many illustrations to be reproduced well. Engravings, paintings, photographs and detailed maps from Germany’s past all serve to make its legacy come alive. Throughout this magnificent work, Neil MacGregor shows that despite its past, Germany is a country that has come into full flower a quarter-century into its fully unified modern state. He presents the healthy perspective of a people who, despite being weighted with baggage, are reconciling well as they move into the future.”  —Perry Munyon, The Pittsburgh Post-Gazette

“MacGregor [is] our greatest cultural polymath. . . . Anyone who wants to understand Germany should read this book.” —Antony Beevor, The Observer


“Immensely readable and sharply intelligent. . . . MacGregor’s chapters move boldly and fluently across time, held together by his own assured by attractively conversational voice. . . . The starting point is often something material, like Riemenschneider’s four evangelists, reprising the successful formula of MacGregor’s wonderful and much-imitated A History of the World in 100 Objects, a previous cooperative venture between the British Museum and the BBC. The objects considered in the present book include things you would expect: Gutenberg’s printing press, Luther’s German translation of the Bible, Meissen porcelain, a modernist cradle and ceramic vases from the Bauhaus, the Volkswagen Beetle. Other objects might be more surprising to readers. The coinage of the Holy Roman Empire and the no less impressive diversity of German sausages both serve to illustrate the historic fragmentation of the German lands, a major theme of the book. . . . The book is filled not just with objects, but with places of memory. There is a fine chapter on the forest and its place in the German imagination, which draws on the fairytales of the Brothers Grimm and the work of Romantic painter Caspar David Friedrich, and takes the story up to the present day and the new meaning of the forest within a green Germany. MacGregor writes especially well about monuments, such as the Brandenburg Gate and the Victory Column in Berlin. He is adept at showing how monuments bear witness to the constant reworking of German history—the work of salvaging, even. . . . MacGregor’s light touch means that we never feel as if we are being hurried along to a predetermined destination, not even in the section called “The Descent” that takes us from Bismarck to Hitler. There is some artful foreshadowing in earlier chapters. . . . MacGregor shows his sill at making objects speak. . . . There are many brilliant vignettes in this book, too many to mention in a review. . . . high-minded, cosmopolitan…beautifully illustrated. MacGregor is an engaging guide who never talks down to readers. He has written a remarkable set of reflections on the objects and places of German memory.” —David Blackbourn, The Guardian


“Four years ago, Neil MacGregor made marvelous use of the British Museum, of which he is the director, to interpret the history of the world through 100 objects. Since the museum owns a fabulous collection of German artefacts—including not one, but two of the original Gutenberg bibles—it makes sense to apply that same method to a country that, at the end of a year of military strutting, we are beginning to view with more respect. . . . Magnificently illustrated and superbly edited. . . . It’s hard to imagine a method more successful than MacGregor’s—the careful juxtaposition of singular objects with their surrounding history—for conveying the complexities of Germany’s continuing journey.” —Miranda Seymour, Daily Telegraph (Four Stars)

“Neil MacGregor’s alternative cultural history of a country uniquely difficult to pinpoint—its borders shifting, its ruling systems manifold for much of the past 500 years—offers the sense of a coherent whole nonetheless. His method is memory. His way in is through objects and people; places and buildings; paintings, toys, and printed money; forests and single oak trees. . . . MacGregor knows unerringly which objects to select and which chapters of Germany’s “enrichingly and confusingly fragmented history” to bring to life through them. . . . This book is immaculately researched, timely and important.” —Rebecca K. Morrison, The Independent


“The director of the British Museum tells the compelling story of a traumatized country through objects and places that represent the enduring strength and hope of the people. . . . MacGregor traces the evolution of German identity. . . . A comprehensive record jam-packed with visuals.”  —Kirkus

“Through artifacts as varied as a sausage, Gutenberg Bibles, and a porcelain rhinoceros, MacGregor illustrates how a composite German identity was forged and the country came to be. . . . His concise lessons in German history form a cogent and fluent account that gets as close to the core of German identity as any book by a non-German could.” —Publishers Weekly (Starred)