The Noise of Time: A Novel (Vintage International) (Paperback) 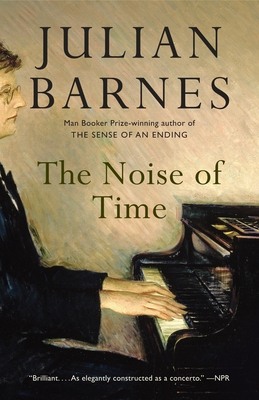 One of the Best Books of the Year: San Francisco Chronicle

1936: Dmitri Shostakovich, just thirty years old, reckons with the first of three conversations with power that will irrevocably shape his life. Stalin, hitherto a distant figure, has suddenly denounced the young composer’s latest opera. Certain he will be exiled to Siberia (or, more likely, shot dead on the spot), Shostakovich reflects on his predicament, his personal history, his parents, his daughter—all of those hanging in the balance of his fate. And though a stroke of luck prevents him from becoming yet another casualty of the Great Terror, he will twice more be swept up by the forces of despotism: coerced into praising the Soviet state at a cultural conference in New York in 1948, and finally bullied into joining the Party in 1960. All the while, he is compelled to constantly weigh the specter of power against the integrity of his music. An extraordinary portrait of a relentlessly fascinating man, The Noise of Time is a stunning meditation on the meaning of art and its place in society.

Julian Barnes is the author of twenty previous books. He has received the Man Booker Prize, the Somerset Maugham Award, the Geoffrey Faber Memorial Prize, the David Cohen Prize for Literature and the E. M. Forster Award from the American Academy of Arts and Letters; in France, the Prix Médicis and the Prix Femina; and in Austria, the State Prize for European Literature. In 2004 he was named Commandeur de l’Ordre des Arts et des Lettres by the French Ministry of Culture. His work has been translated into more than forty languages. He lives in London.

“Brilliant. . . . As elegantly constructed as a concerto.” —NPR

“A condensed masterpiece that traces the lifelong battle of one man’s conscience, one man’s art, with the insupportable exigencies of totalitarianism.” —The Guardian (London)

“Brilliant. . . . Leads us to places only a handful of novelists have the skill and the courage to go.” —The Boston Globe

“Barnes’s storytelling is phenomenal; Shostakovich, as tragic and anxious as he is, is utterly fascinating. “ —The Christian Science Monitor

“Beautifully written. There is a wonderful rhythm to the prose—long passages are broken up by staccato bursts of single sentences—and Mr. Barnes writes with a crystalline clarity.” —The Wall Street Journal

“A tense and elegant study of terror, shame and cowardice, of a celebrated artist capitulating to power, yet on his own terms. . . . Barnes interweaves the painful and the sublime to achieve an epic orchestral effect.” —Minneapolis Star Tribune

“Affecting. . . . In his impressionistic portrait of Shostakovich, the man and the artist, Barnes balances sympathy with a tough-minded clarity. . . . In its examination of the totalitarian state through the life of a single victim, The Noise of Time stands in an honored literary tradition.” —The Miami Herald

“Undoubtedly one of Barnes’s best novels.” —The Sunday Times (London)

“Powerfully imagined and chillingly lucid. . . . Moving . . . Barnes takes us inside the composer’s mind, observing how he reacts to the ceaseless demands of power.” —The Millions

“Excellent. . . . The author’s achievement here: to not only capture the mood of fear
under which Shostakovich worked but also create a tribute to the struggle of all artists.” —The Pittsburgh Post-Gazette

“Moving. . . . Renders Shostakovich’s wrenching personal and political conflicts in a way that makes them impossible to forget or ignore. . . . Barnes’s writing is elegant,

his curiosity boundless, and his intellect formidable.” —Los Angeles Review of Books

“Magnificent. . . . Novels about artistic achievement rarely do justice to their subjects.  The Noise of Time is that rarity. It is a novel of tremendous grace and power, giving voice to the complex and troubled man whose music outlasted the state that sought to silence him.” —Anthony Marra, Publishers Weekly