The Food Explorer: The True Adventures of the Globe-Trotting Botanist Who Transformed What America Eats (Paperback) 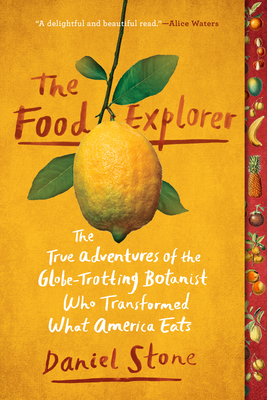 In the nineteenth century, American meals were about subsistence, not enjoyment. But as a new century approached, appetites broadened, and David Fairchild, a young botanist with an insatiable lust to explore and experience the world, set out in search of foods that would enrich the American farmer and enchant the American eater.

Kale from Croatia, mangoes from India, and hops from Bavaria. Peaches from China, avocados from Chile, and pomegranates from Malta. Fairchild’s finds weren’t just limited to food: From Egypt he sent back a variety of cotton that revolutionized an industry, and via Japan he introduced the cherry blossom tree, forever brightening America’s capital. Along the way, he was arrested, caught diseases, and bargained with island tribes. But his culinary ambition came during a formative era, and through him, America transformed into the most diverse food system ever created.

“Daniel Stone draws the reader into an intriguing, seductive world, rich with stories and surprises. The Food Explorer shows you the history and drama hidden in your fruit bowl. It’s a delicious piece of writing.”—Susan Orlean, New York Times bestselling author of The Orchid Thief and The Library Book

Daniel Stone is a staff writer for National Geographic and a former White House correspondent for Newsweek and The Daily Beast. A native of Los Angeles, he holds degrees from UC Davis and Johns Hopkins University.

“Daniel Stone brings a forgotten era of American food back to the table. . . . Stone brings drama, humor, and perspective.”—Associated Press

“Mr. Stone is an amiable narrator who balances botany, culinary history, and travelogue with fast-paced adventure writing and a well-drawn cast of characters.”—The Wall Street Journal

“Narrated in vividly realized, richly descriptive text with accompanying photographs, Stone’s biography reanimates the legacy of an important contributor to the botanical diversity of America. . . . An erudite and entertaining historical biography of a food pioneer.”—Kirkus Reviews

“The Food Explorer does a wonderful job bringing Fairchild’s story to life and giving this American original some overdue recognition.”—BookPage

“This fascinating read will appeal to those interested in American history and food culture, travel narratives, and agriculture.”—Library Journal (starred review)

“[Stone] captures the flavor of an adventurous age, using Fairchild’s voluminous writings to launch vivid descriptions of his travels.”—Booklist

“Daniel Stone draws the reader into an intriguing, seductive world, rich with stories and surprises. The Food Explorer shows you the history and drama hidden in your fruit bowl. It’s a delicious piece of writing.”—Susan Orlean, New York Times bestselling author of The Orchid Thief

“The Food Explorer is not only filled with fascinating information and incredible characters, it’s also original, colorful, and irresistibly charming. I think I had almost as much fun reading about Fairchild’s adventures as he had living them.”—Candice Millard, New York Times bestselling author of Hero of the Empire

“Daniel Stone spins a fascinating tale of a most unusual explorer. Any American who has ever savored a cashew or a nectarine has David Fairchild to thank. With a sharp eye and a deft touch, Stone has brought to life an intriguing new hero and his Gilded Age adventures around the globe.”—Evan Thomas, New York Times bestselling author of Being Nixon

“Move over, Anthony Bourdain. Here is a story about a profligate world traveler with a discriminating palate. A delightful tale of science and wanderlust.”—Hampton Sides, New York Times bestselling author of In the Kingdom of Ice