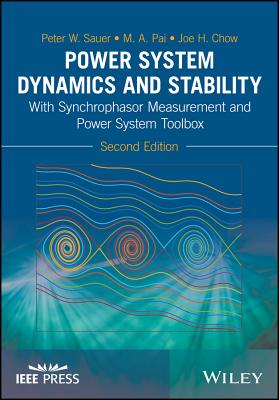 This new edition addresses the needs of dynamic modeling and simulation relevant to power system planning, design, and operation, including a systematic derivation of synchronous machine dynamic models together with speed and voltage control subsystems. Reduced-order modeling based on integral manifolds is used as a firm basis for understanding the derivations and limitations of lower-order dynamic models. Following these developments, multi-machine model interconnected through the transmission network is formulated and simulated using numerical simulation methods. Energy function methods are discussed for direct evaluation of stability. Small-signal analysis is used for determining the electromechanical modes and mode-shapes, and for power system stabilizer design.

Time-synchronized high-sampling-rate phasor measurement units (PMUs) to monitor power system disturbances have been implemented throughout North America and many other countries. In this second edition, new chapters on synchrophasor measurement and using the Power System Toolbox for dynamic simulation have been added. These new materials will reinforce power system dynamic aspects treated more analytically in the earlier chapters.

Power System Dynamics and Stability, 2nd Edition, with Synchrophasor Measurement and Power System Toolbox combines theoretical as well as practical information for use as a text for formal instruction or for reference by working engineers.

Peter W. Sauer obtained his BS in Electrical Engineering from the University of Missouri at Rolla in 1969, and the MS and PhD degrees in Electrical Engineering from Purdue University in 1974 and 1977 respectively. He served as a facilities design engineer in the U.S. Air Force from 1969 to 1973. He is currently the Grainger Professor of Electrical Engineering at the University of Illinois, Urbana-Champaign where he has been since 1977. His main work is in modeling and simulation of power systems with applications to steady-state and transient stability analysis. He served as the program director for power systems at the National Science Foundation from 1990 to 1991. He was a cofounder of PowerWorld Corporation and the Power Systems Engineering Research Center (PSERC). He is a registered Professional Engineer in Virginia and Illinois, a Fellow of the IEEE, and a member of the U.S. National Academy of Engineering. M. A. Pai is Professor Emeritus in Electrical and Computer Engineering at the University of Illinois, Urbana-Champaign. He received his BE degree from Univ. of Madras, India in 1953, MS and PhD degrees from University of California, Berkeley in 1957 and 1961 respectively. He was with the Indian Institute of Technology, Kanpur, India from 1963 to 1981 and at the University of Illinois, Urbana-Champaign, from 1981 to 2003. His research interests are in dynamics and stability of power systems, smart grid, renewable resources and power system computation. He is the author of several text books and research monographs in these areas. He is a Fellow of IEEE, I.E. (India) and the Indian National Science Academy. Joe H. Chow is Professor of Electrical, Computer, and Systems Engineering at Rensselaer. He received his BS degrees in Electrical Engineering and Mathematics from the University of Minnesota, Minneapolis, in 1974, and his MS and PhD degrees from the University of Illinois, Urbana-Champaign, in 1975 and 1977. He worked in the power systems business at General Electric Company in 1978 and joined Rensselaer in 1987. His research interests include power system dynamics and control, voltage stability analysis, FACTS controllers, synchronized phasor measurements and applications, and integration of renewable resources. He is a fellow of IEEE, and past recipient of the Donald Eckman Award from the American Automatic Control Council, the Control Systems Technology Award from the IEEE Control Systems Society, and the Charles Concordia Power Systems Engineering Award from the IEEE Power and Energy Systems Society.