Yearning for the Impossible: The Surprising Truths of Mathematics, Second Edition (Paperback) 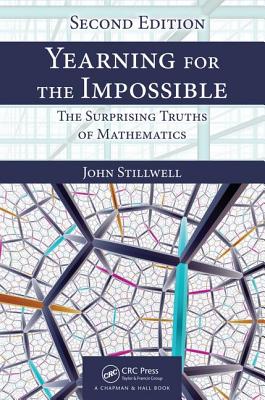 Yearning for the Impossible: The Surprising Truths of Mathematics, Second Edition (Paperback)

Yearning for the Impossible: The Surprising Truth of Mathematics, Second Edition explores the history of mathematics from the perspective of the creative tension between common sense and the "impossible" as the author follows the discovery or invention of new concepts that have marked mathematical progress. The author puts these creations into a broader context involving related "impossibilities" from art, literature, philosophy, and physics. This new edition contains many new exercises and commentaries, clearly discussing a wide range of challenging subjects.

John Stillwell was born in Melbourne, Australia. From 1970 to 2001 he taught at Monash University in Melbourne, and since 2002 he has been Professor of Mathematics at the University of San Francisco. He has been an invited speaker at several international conferences, including the International Congress of Mathematicians in Zurich, 1994. His works cover a wide spectrum of mathematics, from translations of classics by Dirichlet, Dedekind, Poincare, and Dehn to books on algebra, geometry, topology, number theory, and their history. For his expository writing, he was awarded the Chauvenet Prize of the Mathematical Association of America in 2005, and the AJCU National Book Award in 2009.