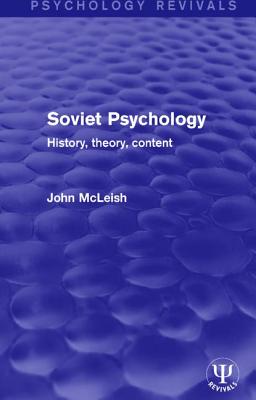 Originally published in 1975, this title sets out to show us the differences between Soviet and other ways of thinking about nature, man, and society. The basic factor distinguishing Soviet psychology is that it views phenomena from the perspective of a highly articulated body of theoretical assumptions, and rejects the inductive 'eclecticism' of Western psychology.

The theoretical framework within which Soviet psychology functions is the product of a distinctive socio-political and cultural development in Russia profoundly shaped by the institutions of autocracy and Orthodox religion, and the economic system of serfdom, and the radical revolt which grew up in opposition to this and advocated materialism, secularism, and atheism. This radical philosophic tradition in Russia, best represented by the writings of Chernishevski, fused with the doctrines of Marxism and the new science of behaviour developed by Sechenov and Pavlov to create the theoretical framework of Soviet psychology.

The book also analyses the discussions, controversies, and decrees which are at the root of the contemporary science of behaviour in the Soviet Union, and points to the impressive body of empirical knowledge which has arisen.

Soviet Psychology is unique in presenting Soviet psychology from an 'inside' point of view, and in making us appreciate the strongly theoretical stance of Soviet psychology which Professor McLeish claims is unlikely to be much influenced by the new atmosphere of d tente.