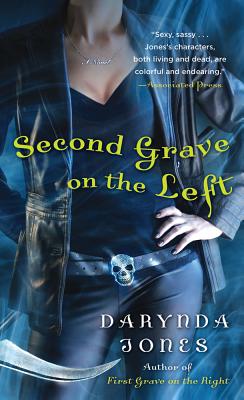 This is book number 2 in the Charley Davidson Series series.

Second Grave on the Left

If you hang around with dead people, life can deliver a whole world of trouble.

Take it from Charley Davidson, part-time P.I. and full-time Grim Reaper. The deceased find her very sparkly. Demons find her irresistible. And one entity in particular wants to seduce her in every way possible…

When Charley and Cookie, her best friend slash receptionist, have to track down a missing woman, the case is not quite as open and shut as they anticipate. Meanwhile, Reyes Alexander Farrow (otherwise known as the Son of Satan. Yes. Literally.) has left his corporeal body because he's being tortured by demons who want to lure Charley closer. But Reyes can't let that happen. Because if the demons get to Charley, they'll have a portal to heaven. And if they have a portal to heaven…well, let's just say it wouldn't be pretty.

Can Charley handle hot nights with Reyes and even hotter days tracking down a missing woman? Can she keep those she loves out of harm's way? And is there enough coffee and chocolate in the world to fuel her as she does?

“Jones perfectly balances humor and suspense in [this] paranormal thriller featuring grim reaper, PI, and ‘all-around badass' Charley Davidson…It's the distinctive characters, dead and alive, and the almost constant laughs that will leave readers eager for the next installment.” —Publishers Weekly (starred review)

“This is an amazing book and a fantastic series! In a lot of ways it is similar to Janet Evanovich's Stephanie Plum series only ten times better!” —Night Owl Reviews

“Sexy, sassy . . . Jones's characters, both living and dead, are colorful and endearing. . . . Cheeky charm . . . sarcastic wit.” —The Associated Press on First Grave on the Right

“Jones skillfully establishes the novel's setting and keeps up the pace with plenty of action. And let's be honest--the sex is pretty hot, too. Fans of Sherrilyn Kenyon and other authors of paranormal romance will love this series debut.” —Library Journal (starred review) on First Grave on the Right

“Fast-talking Charley's wicked exuberance and lust for life will appeal to fans of MaryJanice Davidson and Janet Evanovich and maybe fill a hole for those mourning the recently canceled Ghost Whisperer.” —Publishers Weekly on First Grave on the Right

“Jones makes a truly memorable debut with her unique tale that is sexy, mysterious, and sarcastically fun!” —RT Books Reviews on First Grave on the Right

“It's a fun, sexy, exciting read.” —Suspense Magazine on First Grave on the Right

“A true paranormal princess has been proclaimed. Bravo Ms. Jones, you have just hit the big time. . . . A brilliant novel . . . Do not walk; run to get your copy of First Grave on the Right when it debuts.” —Night Owl Reviews

“Hold on to your hats and get comfortable, you won't want to get up for a long, long time as Charley Davidson sweeps you in and holds on tight.” —The Romance Reviews on First Grave on the Right

“A smashing, award-winning debut novel.” —Goodreads on First Grave on the Right