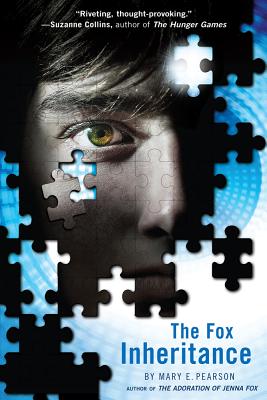 This is book number 2 in the The Jenna Fox Chronicles series.

Once there were three. Three friends who loved each other—Jenna, Locke, and Kara. And after a terrible accident destroyed their bodies, their three minds were kept alive, spinning in a digital netherworld. Even in that disembodied nightmare, they were still together. At least at first. When Jenna disappeared, Locke and Kara had to go on without her. Decades passed, and then centuries.

In The Fox Inheritance, it is two-hundred-and-sixty years later, and they have been released at last. Given new, perfect bodies, Locke and Kara awaken to a world they know nothing about, where everyone they once knew and loved is long dead.

Everyone except Jenna Fox.

Pearson studied art at Long Beach State University, and worked as an artist before earning her teaching credentials at San Diego State University. She writes full-time from her home in Carlsbad, California, where she lives with her husband and two dogs.

“This is a mesmerizing story that will be greeted enthusiastically by Jenna Fox fans.” —VOYA

“The ethical debates around whether science should be limited by conscience and not just ability are well integrated into a story that is equally strong as an exploration of home, identity, and the meaning of survival.” —BCCB

“A gripping story that begs the question: Do you really know what lies at the genesis of your friend's biology, psyche or even their heart?” —Shelf Awareness

“It is through his [Locke's] viewpoint that we experience the confusing futuristic world, the thrilling suspense of the chase, the charged emotional reunion of the friends, and the admirably complex playing out of the issues of trust, ethics, and betrayal.” —Horn Book Magazine

“The book's timely and haunting questions will leave thoughtful readers with much to ponder.” —Kirkus Reviews