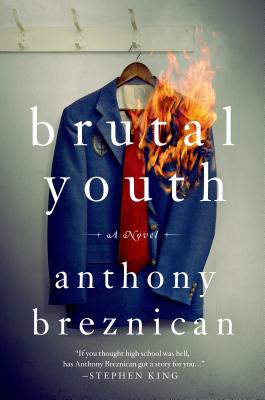 By Anthony Breznican
Email or call for price
Out of Print - This Title is Unlikely to be Available.

Three freshmen must join forces to survive at a troubled, working-class Catholic high school with a student body full of bullies and zealots, and a faculty that's even worse in Anthony Breznican's Brutal Youth

With a plunging reputation and enrollment rate, Saint Michael's has become a crumbling dumping ground for expelled delinquents and a haven for the stridently religious when incoming freshman Peter Davidek signs up. On his first day, tensions are clearly on the rise as a picked-upon upperclassmen finally snaps, unleashing a violent attack on both the students who tormented him for so long, and the corrupt, petty faculty that let it happen. But within this desperate place, Peter befriends fellow freshmen Noah Stein, a volatile classmate whose face bears the scars of a hard-fighting past, and the beautiful but lonely Lorelei Paskal —so eager to become popular, she makes only enemies.

To even stand a chance at surviving their freshmen year, the trio must join forces as they navigate a bullying culture dominated by administrators like the once popular Ms. Bromine, their embittered guidance counselor, and Father Mercedes, the parish priest who plans to scapegoat the students as he makes off with church finances. A coming-of-age tale reversed, Brutal Youth follows these students as they discover that instead of growing older and wiser, going bad may be the only way to survive.

ANTHONY BREZNICAN was born and raised in Western Pennsylvania and attended Catholic school for 13 years – longer than some of his teachers would have liked. He graduated from the University of Pittsburgh in 1998, and went on to work as a reporter at The Arizona Republic, Associated Press, and USA Today. He is currently a senior staff writer for Entertainment Weekly, and lives in Los Angeles with his wife, a librarian, and their two children. Brutal Youth is his first novel.

“It's crackling good entertainment: arresting from the first page to the last, full of plot twists, characters to root for (or against) and plenty of suspense about how the various story lines will resolve themselves.” —USA Today

“Breznican captures a perfect balance of horror, heartbreak, and resilience and takes the high school novel into deeper places. Great for the beach but not just a summer read.” —Library Journal, starred review

“A story that confidently rips through tangles of high school insanity. The author molds real characters out of high school stereotypes, most notably the misfits, all struggling for a humble slice of dignity within St. Michael's wretched, bleeding walls. The satiric narrative is as brilliantly hilarious as it is poignant and heartrending.” —School Library Journal, starred review

“While it certainly contains elements unique to parochial school, those who remember the passing of their high school years with relief rather than regret will feel the unease and quiet fear dripping off every page.” —Book Reporter

“If you thought high school was hell, has Anthony Breznican got a story for you…Every bully who stalked you, every sadistic teacher who ever terrified you, every stupid prank, every hopeless crush and false friend: they're all here, along with a few kids who hang together and try to do the right thing in a brutal environment. By turns funny and terrifying, Brutal Youth is an unputdownable tour-de-force, a Rebel Without a Cause for the 21st century.” —Stephen King

“With Brutal Youth, Anthony Breznican has captured high-school life in all its gruesome, wild, survival-of-the-fittest lunacy. His portrait of teenagers--and the theoretical grownups who tend to them--is, by turns, painfully funny and painfully painful, but always sharp as a well-carved stick.” —Gillian Flynn, New York Times bestselling author of Gone Girl

“Anthony Breznican's debut screams with undeniable talent. Part The Outsiders. Part Stephen King's The Body. The aptly named Brutal Youth is a funny, tough, and heartbreaking book about the darker side of growing up.” —Stephen Chbosky, New York Times bestselling author of The Perks of Being a Wallflower

“Brutal Youth by Anthony Breznican is one of the most thought-provoking, troubling, captivating stories I've read in a long time. My heart still hurts when I think of what those characters went through. Breznican does a fantastic job of creating people you fall in love with, making you experience their pain and cheer their triumphs as each page goes by. Their stories will haunt me for some time to come. The anti-bullying message is earned, heartily, instead of being thrust in your face. First and foremost the book is an intriguing, rich, perfectly paced, entertaining read. I also enjoyed the dark humor that offsets the harrowing tone at just the right spots. Highly recommended.” —James Dashner, New York Times bestselling author of The Maze Runner

“As a child, few things are scarier than school. In Brutal Youth, you'll realize how right your younger self was. This one will haunt you.” —Brad Meltzer, author of The Fifth Assassin and The Book of Lies

“Breznican has accomplished that rare feat of unflinchingly exposing the high school experience in all of its hilarity, vengeance, and terror. You'll think Roald Dahl just went for a swim in the world of John Hughes and came out wearing prison stripes. Life isn't fair... but high school is brutal.

This is the most richly detailed and nuanced academic microcosm since Dead Poets Society. You may have never been to St. Michael the Archangel High School, but you will fear it after reading this powerful and hilarious debut novel. Never has a story brought me back to the merciless teachers and ruthless bullies with such poetry and wit.” —Jason Reitman, writer/director/producer of JUNO, THANK YOU FOR SMOKING, UP IN THE AIR and LABOR DAY