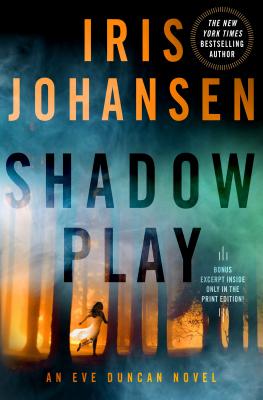 By Iris Johansen
Email or call for price
Out of Print - This Title is Unlikely to be Available.

This is book number 19 in the Eve Duncan series.

Eve Duncan: the most sought-after artist in the field of forensic sculpting. Dedicated to her work ever since her daughter Bonnie was taken and killed at the age of seven, Eve feels a sense of duty to those whose lives were lost and whose bones are now in her hands.

When a sheriff in California contacts her with a request for help on the reconstruction of the skull of a girl whose body has been buried for eight years, his fierce investment in the case puzzles her. But when Eve finds herself experiencing an unusual connection with the girl she calls Jenny, she becomes entangled in the case more intensely than she could have ever imagined. Not since Bonnie has Eve had such an experience, and suddenly she finds herself determined to solve the murder and bring closure to the crime.

When the killer discovers that Eve Duncan is on the case, he begins to move in. First, eliminating those most remotely involved. Then, targeting those more closely tied to Jenny. And he won't rest until anything and anyone that could reveal his identity is eliminated-but even that won't satisfy him. He wants something more. He wants something more. One girl escaped from him. And she is his ultimate prize...

Iris Johansen is the New York Times bestselling author of Chasing the Night, Blood Game, Eve, and Eight Days to Live, among others. She began writing after her children left home for college, and first achieved success in the early 1980s writing category romances. In 1991, she began writing suspense historical romance novels, and in 1996 she turned to crime fiction, with which she has had great success. She lives near Atlanta, Georgia.

“Delivering gut-wrenching emotion and spine-tingling suspense is what Johansen does best, and when you add in a touch of the supernatural...you get the perfect storm of a thriller! Johansen never disappoints!” —RT Book Reviews (4 ½ stars) on Your Next Breath

“The suspense builds to a conclusion that is shocking, to say the least...Johansen has proved that Catherine is one deadly CIA agent.” —Suspense Magazine on Your Next Breath

“Gripping...Iris Johansen's talent in character development, impeccable plotting, and remarkable depiction is nonpareil.” —Reader to Reader on Your Next Breath

“An enticing hook and compelling storytelling.” —Kirkus Reviews on The Perfect Witness

“This page-turner builds to a breathless conclusion.” —Publishers Weekly on The Perfect Witness

“Johansen builds the fires of intrigue with each moment, each turn of the page, and each stroke of her masterful pen.” —Affaire de Coeur on Live to See Tomorrow

“In a genre laden with macho, action-hero figures, Johansen's shrewd and steely female operativ is as tough as they come.” —Booklist on Live to See Tomorrow

“Iris Johansen expertly ratchets up the suspense as the action builds to a riveting conclusion.” —Publishers Weekly on Silencing Eve

“Building to a shocking conclusion, Johansen's paranormal suspense thriller will have fans of Eve's exploits clamoring for the trilogy's final installment.” —Booklist on Hunting Eve

“Superstar Johansen makes it look intriguing and suspenseful as she kicks off another trilogy within her Eve Duncan series...Johansen never misses!” —RT Book Reviews (4 ½ stars) on Taking Eve

“Filled with intriguing twists and characters and an overarching mystery that will keep fans coming back.” —Kirkus Reviews on Taking Eve