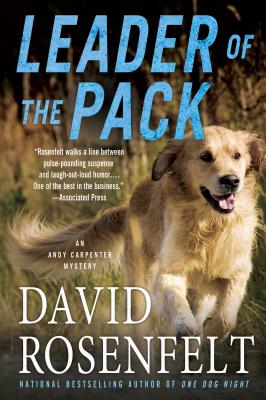 This is book number 10 in the An Andy Carpenter Novel series.

Over the course of his legal career, Andy Carpenter has lost a few cases. But that doesn't mean he forgets his clients. Andy has always been convinced that Joey Desimone, a man convicted of murder nine years ago, was innocent and believes that Joey's family's connections to organized crime played a pivotal role in his conviction. While there isn't much Andy can do for him while he serves out his prison sentence, Joey suggests that he check up on Joey's elderly uncle. He'd rather not, but as a favor to Joey, Andy agrees to take his dog, Tara, on a few visits.

The old man's memory is going, but when Andy tries to explain why he's there, it jogs something in the man's mind, and his comments leave Andy wondering if Uncle Nick is confused, or if he just might hold the key to Joey's freedom after all this time.

Andy grabs on to this thread of possibility and follows it into a world where the oath of silence is stronger than blood ties, and where people will do anything to make sure their secrets are kept.

Praise for Leader of the Pack

“Rosenfelt still weaves a compelling narrative that will stump even the expert Perry Mason fan.”—Associated Press

“A fun mystery…surprising enough that I gasped in public…The ending is deeply satisfying.”—[New Jersey] Star Ledger

“Entertaining…a good-natured read that isn’t quite as easygoing as it seems. Like its hero.”—Booklist

Praise for One Dog Night

“A blessed anomaly in crime fiction…Andy is like a gulp of cold water on a steamy day…Rosenfelt peels back the layers of puzzlement ever so skillfully, tantalizing us throughout until, finally, both Andy and the reader are enlightened, simultaneously. A gem.”—Booklist (starred review)