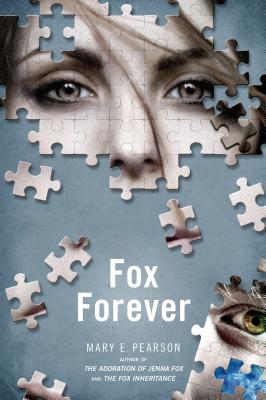 This is book number 3 in the The Jenna Fox Chronicles series.

Locke Jenkins has some catching up to do. After spending 260 years as a disembodied mind in a little black box, he has a perfect new body. But before he can move on with his unexpected new life, he'll have to return the Favor he accepted from the shadowy resistance group known as the Network.
Locke must infiltrate the home of a government official by gaining the trust of his daughter, seventeen-year-old Raine, and he soon finds himself pulled deep into the world of the resistance—and into Raine's life.
In Fox Forever, Mary E. Pearson brings the story she began in The Adoration of Jenna Fox and continued in The Fox Inheritance to a breathtaking conclusion as Locke discovers that being truly human requires much more than flesh and blood.

Pearson studied art at Long Beach State University, and worked as an artist before earning her teaching credentials at San Diego State University. She writes full-time from her home in Carlsbad, California, where she lives with her husband and two dogs.

“Raises the ante in unexpected ways until the very last page.” —Publishers Weekly, starred review on The Adoration of Jenna Fox

“This is a beautiful blend of science fiction, medical thriller, and teen-relationship novel that melds into a seamless whole that will please fans of all three genres.” —School Library Journal, starred review on The Adoration of Jenna Fox

“[An] outstanding examination of identity, science and ethics.” —Kirkus Reviews, starred review on The Adoration of Jenna Fox

“This novel is truly unlike any other I have ever read and is a breath of fresh air.” —ELLEgirl on The Adoration of Jenna Fox

“This is an amazingly powerful, thought-provoking, just brilliant novel.” —Teen Book Review on The Adoration of Jenna Fox

“Riveting, thought-provoking.” —Suzanne Collins, author of The Hunger Games on The Fox Inheritance

“You'll have no problem getting wrapped up in Locke, Kara, and Jenna's fascinating (and slightly terrifying) story, even if you haven't read the first novel.” —Seventeen.com on The Fox Inheritance

“The denouement offers Locke and Jenna an opportunity for closure in their relationship, and the final chapter, set thirty years later, brings the trilogy to a satisfying conclusion.” —The Horn Book on Fox Forever