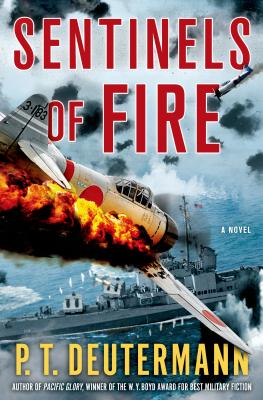 P.T. Deutermann's World War II navy series began with the award-winning Pacific Glory, followed by the brilliantly reviewed Ghosts of Bungo Suido. His new novel Sentinels of Fire tells the tale of a lone destroyer, the USS Malloy, part of the Allied invasion forces attacking the island of Okinawa and the Japanese home islands.

By the spring of 1945, the once mighty Japanese fleet has been virtually destroyed, leaving Japan open to invasion. The Japanese react by dispatching hundreds of suicide bombers against the Allied fleet surrounding Okinawa. By mid-May, the Allied fleet is losing a major ship a day to murderous swarms of kamikazes streaming out of Formosa and southern Japan. The radar picket line is the first defense and early warning against these hellish formations, but the Japanese direct special attention to these lone destroyers stationed north and west of Okinawa.

One destroyer, the USS Malloy, faces an even more pressing issue when her Executive Officer Connie Miles begins to realize that the ship's much-admired Captain Pudge Tallmadge is losing his mind under the relentless pressure of the attacks. Set against the blazing gun battles created by the last desperate offensive of the Japanese, Executive Officer Miles and the ship's officers grapple with the consequences of losing their skipper's guidance—and perhaps the ship itself and everyone on board.

Vividly authentic, historically accurate, and emotionally compelling, Sentinels of Fire is military adventure at its best, by an author whose career as a Navy captain informs every page.

P. T. DEUTERMANN is the author of many previous novels including Pacific Glory, which won the W. Y. Boyd Literary Award for Excellence in Military Fiction. Deutermann spent twenty-six years in military and government service, as a captain in the Navy and in the Joint Chiefs of Staff as an arms-control specialist. He lives with his wife in North Carolina.
“With echoes of both Thomas Heggen's Mr. Roberts (1946) and Herman Wouk's The Caine Mutiny (1952), in which a junior officer must try to maintain the efficiency and spirit of the crew under a captain's relentlessly mean and vicious command, this is an excellent WWII naval adventure from an author whose backlist includes the award-winning Pacific Glory (2011), among other military-themed novels.” —Booklist