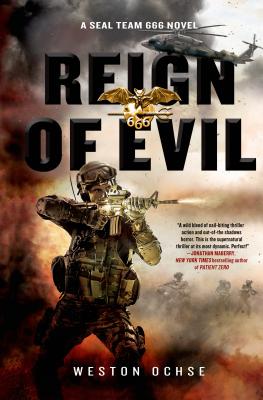 By Weston Ochse
Email or call for price
Out of Print - This Title is Unlikely to be Available.

This is book number 3 in the SEAL Team 666 series.

Legend holds that when Britain is in its darkest hour, King Arthur will return to save the country, if not the world. That legend is dead wrong. When a Grove of Druids sacrifice the lives of a group of innocents, including the fiancée of a member of SEAL Team 666, the ancient king is brought back from the dead and sets his sight on subjugating humanity and cleansing his land of all who are not true Britons. Because of political sensitivities, Triple 6 is ordered to stand down, but that order is ignored by one of them seeking his own vengeance. Now, the members of America's elite supernatural-hunting team must decide what is more important: their orders or their loyalty to their own team member.

Film rights to the SEAL Team 666 series were optioned by MGM, and Dwayne "The Rock" Johnson signed on to star in the feature film adaptation!

WESTON OCHSE (pronounced ‘oaks’) has won the Bram Stoker Award and been nominated for the Pushcart Prize. In addition to his previous SEAL Team 666 novels, his work has appeared in comic books and magazines such as Cemetery Dance and Soldier of Fortune. He is a retired U.S. Army intelligence officer and current intelligence officer for the Defense Intelligence Agency.  He lives in Arizona within shouting distance of the International Border.

“Wherever the supernatural threatens the United States and her allies, Seal Team 666 will be there locked, cocked and ready to rock.” —Geekmundo

“A fast-paced adventure that straddles the worlds of special operations and the paranormal.” —Kirkus Reviews

“The military action is first rate, and the horror is tight and scary. Readers who enjoy Brad Taylor's and Brad Thor's military thrillers, but who don't mind stories that add to the military mix some over-the-top terror in the manner of Jonathan Maberry, will find this the perfect diversion. The ending screams for a sequel, which would be most welcome.” —Booklist

“SEAL Team 6, the real-life elite team that killed Osama bin Laden, has never seen the kinds of things that confront its fictional counterpart.” —Kirkus Reviews on the SEAL Team 666 series

“Every story-line is as taut as a gunfighter's nerves, and individual scenes pop like firecrackers. I raced through this novel and when it ended, I wanted more.” —Peter Straub, New York Times bestselling author of In the Night Room on the SEAL Team 666 series

“SEAL Team 666 is like X-Files and Torchwood written by Tom Clancy: ingenious, creepy, and entertaining.” —Kevin J. Anderson, international bestselling author of Death Warmed Over on the SEAL Team 666 series