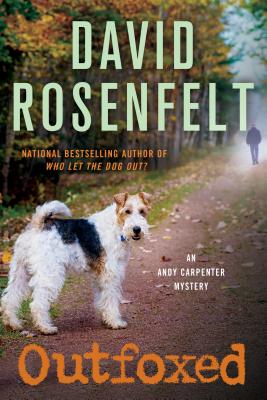 This is book number 14 in the An Andy Carpenter Novel series.

Defense lawyer Andy Carpenter spends as much time as he can working on his true passion, the Tara Foundation, the dog rescue organization he runs. Lately, Andy has been especially involved in a county prison program where inmates help train dogs the Tara Foundation has rescued to make them more adoptable, benefiting both the dogs and the prisoners. One of the prisoners Andy has been working with is Brian Atkins, who has 18 months left on a 5-year term for fraud. Brian has been helping to train Boomer, an adorable fox terrier the Tara Foundation rescued from a neglectful owner. Brian and Boomer are clearly a terrific match. In fact, Andy hopes that Brian will adopt Boomer himself, once his sentence is up. But one day, Andy arrives at the prison to discover that Brian has used Boomer to make an ingenious escape, and man and dog are both in the wind. The next day, the man on whose testimony Brian was convicted is found murdered. Brian is caught and arrested for the crime, though he forcefully protests his innocence. Suddenly, Andy finds himself with a new client in Brian and a new dog in Boomer. And as he starts to dig deeper into the murder and the events leading up to it, Andy realizes he might be putting them all in far more danger than anyone had realized.
DAVID ROSENFELT is the Edgar-nominated and Shamus Award-winning author of more than twenty Andy Carpenter novels, including One Dog Night, Collared, and Deck the Hounds; its spinoff series, The K-Team; the Doug Brock thriller series, which starts with Fade to Black; and stand-alone thrillers including Heart of a Killer and On Borrowed Time. Rosenfelt and his wife live in Maine with an ever-changing pack of rescue dogs. Their epic cross-country move with 25 of these dogs, culminating in the creation of the Tara Foundation, is chronicled in Dogtripping.

“Dog lovers across the country drool at the thought of a new mystery about the curmudgeonly lovable lawyer and his quirky entourage…In each and every book, Rosenfelt manages to make the reading both humorous (laugh-out-loud funny) and edge-of-your-seat suspenseful.” —Huffington Post

“Entertaining…The self-deprecating lead, who winds up playing amateur sleuth, is engaging enough, and the plot follows a predictable course to a nevertheless satisfying finish.”—Publishers Weekly

“David Rosenfelt is at the top of his game with Outfoxed…Perhaps, it is Andy’s self-effacing, droll humor that makes him one of the most appealing protagonists in the overcrowded crime fiction genre. . Rosenfelt, now, can be compared with other crime fiction masters…his humor and irony a match for Elmore Leonard.”—David Rothenberg, WBAI