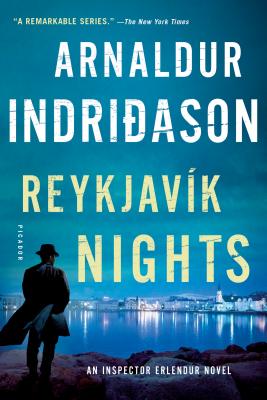 By Arnaldur Indridason, Victoria Cribb (Translated by)
$18.00
Email or call for price.

This is book number 10 in the An Inspector Erlendur Series series.

Erlendur is a young officer assigned to traffic duties. He is not yet a detective. He works nights. Reykjavík’s nights are full of car crashes, robberies, fights, drinking, and sometimes an unexplained death.

One night a homeless man Erlendur knows is found drowned. Then a young woman on her way home from a club vanishes and both cases go cold.

But Erlendur’s instincts tell him that the fates of these two victims are worth pursuing. He is inexorably drawn into a world where everyone is either in the dark or on the run.

“Slowly but surely gathers powerful, page-turning momentum. This installment stands on its own, but it's all the more impressive for giving new insight into Erlendur.” —Publishers Weekly (starred) on Reykjavik Nights

“Indridason has crafted a stellar prequel to his popular series, offering both insight into Erlendur's gloom and a glimpse of what he was like before the cloud settled in fully.” —Booklist

“What's Icelandic for ‘we have ourselves a winner?” —Newsday

“Puts Iceland on the map as a major destination for enthusiasts of Nordic crime fiction.” —Marilyn Stasio, The New York Times Book Review

“Like his protagonist, Indridason is calm, methodical and unassuming. With Reykjavik's nights as a backdrop, what starts out as a modest tale of an unfortunate death develops into a deeply involving tale of chronic neglect, drug addiction, spousal abuse and the unsavory nature of fate.” —Chicago Tribune, Crime Fiction Roundup on Reykjavik Nights

“Indridason and Stieg Larsson have produced two of the best crime novels of the year.” —The Independent (UK)

“Every one of these writers is good [Hakan Nesser, Kjell Eriksson, Karin Fossum], but in my book, Arnaldur Indridason is even better.” —Joe Queenan, Los Angeles Times