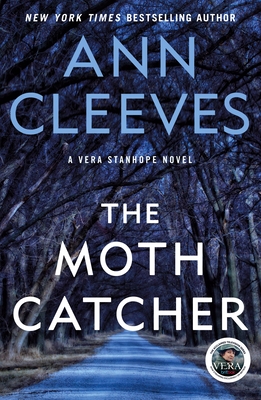 This is book number 7 in the Vera Stanhope series.

From Ann Cleeves—New York Times bestselling and award-winning author of the Vera and Shetland series, both of which are hit TV shows—comes The Moth Catcher.

“Ann Cleeves is one of my favorite mystery writers.”—Louise Penny

Life seems perfect in the quiet community of Valley Farm. Then a shocking discovery shatters the silence. The owners of a big country house have employed a house-sitter, a young ecologist, to look after the place while they’re away. But his dead body is found by the side of the lane—a lonely place to die.

When DI Vera Stanhope arrives on the scene, she finds the body of a second man. What the two victims seem to have in common is a fascination with studying moths—and with catching these beautiful, intriguing creatures.

The others who live in Valley Farm have secrets too: Lorraine’s calm demeanor belies a more complex personality; Annie and Sam’s daughter, Lizzie, is due to be released from prison; and Nigel watches, silently, every day, from his window. As Vera is drawn into the claustrophobic world of this increasingly strange community, she realizes that there may be many deadly secrets trapped there . . .

Shetland and Vera are available on BritBox in the United States. An adaptation of The Long Call, the first book in her Two Rivers series, will premiere on BritBox in 2022.

“It’s easy to admire Vera’s brainpower. . . her adventures have been a hit on British television, and readers devoted to Cleeves’ tales of Jimmy Perez will want to give Vera a try.” —Kirkus Reviews

"The Moth Catcher is set in the picturesque part of Vera's bailiwick. The great strengths of Cleeves' writing are the beautiful and convincing characterization and the storming story line." —Crime Squad

"Ann Cleeves is a skillful technician, keeping our interest alive and building slowly up to the denouement. Her easy use of language and clever story construction make her one of the best natural writers of detective fiction." —Sunday Express (UK)

"If you're a fan of Frances Fyfield, Minette Walters, or Val McDermid, get to know Cleeves." —The Globe and Mail (Canada)