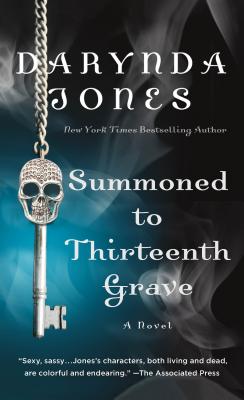 This is book number 13 in the Charley Davidson Series series.

Thirteen is the most unlucky number. What could possibly go wrong for Grim Reaper Charley Davidson in her latest—and last—paranormal adventure?


Charley is dead angry. She’s been kicked off the earthly plane for eternity—which is exactly the amount of time it takes to make a person stark, raving mad. But someone’s looking out for her, and Charley’s allowed to return after a mere hundred years in exile. Surely not that much has changed since then…right?


She’s missed her daughter. Reyes. Cookie and Garrett and Uncle Bob. Now that Charley’s finally back on earth, it’s time to solve the burning questions that still need answering. What happened to her mother? How did she really die? Who killed her? Is a batch of cupcakes the best medicine to mend a broken heart? The epic showdown between good and evil is about to begin. . .


Praise for the Grave

"Series fans will miss Jones’s snarky humor as they say goodbye to Charley, Reyes, and the host of memorable supporting characters they’ve come to love over the years." - Publisher's Weekly on Summoned to Thirteenth Grave

"Jones gives fans a classic Charley Davidson novel—a story that is funny, smart, sassy, and set at a break-neck pace." - Booklist on Summoned to Thirteenth Grave

“Sexy, sassy…Jones’s characters, both living and dead, are colorful and endearing.” —The Associated Press on First Grave on the Right