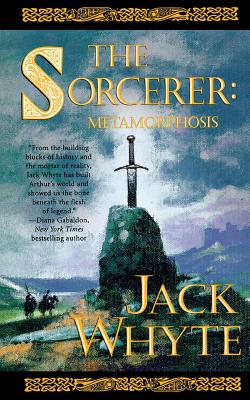 This is book number 6 in the Camulod Chronicles series.

Throughout the widely praised Camulod Chronicles, Merlyn Britannicus has been driven by one sacred dream--to see Britain united under one just, powerful king. In The Sorcerer: Metamorphosis, it is time for the Sorcerer to fulfill his promise--to present the battle-proven Arthur as the Riothamus, the High King of Britain. When Arthur miraculously withdraws the Sword of Kingship from the stone in which it is set, he proves himself the true and deserving king--sworn to defend the Christian faith against invaders, and to preserve Britain as a powerful, united force.

The Sorcerer has fulfilled his promise. The King is crowned, Britain is united--and the face of history and legend is forever changed.

JACK WHYTE was born and raised in Scotland and has lived in Canada since 1967.  He has been an actor, orator, singer, and poet at various stages of his life, and was awarded an honorary doctorate of letters for his contribution to Canadian popular fiction.  Whyte is the author of the internationally bestselling Dream of Eagles series and the Templar trilogy.  He lives in Kelowna, British Columbia.

“From the building blocks of history and the mortar of reality, Jack Whyte has built Arthur's world, and showed us the bone beneath the flesh of legend.” —Diana Gabaldon

“The Camulod Chronicles [continue] with this finely crafted, altogether satisfying book. When Arthur takes the sword from the stone and makes it 'sing,' we are there with him and the legend becomes fully fleshed. The best book in a series that started strong and just kept getting better. Read this book even if you haven't read the others in the series.” —Salem Statesman-Journal