Hearts of the Missing: A Mystery (Hardcover) 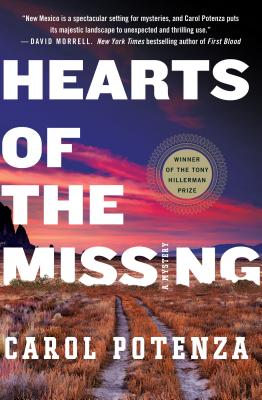 “After being forced to move and give up law school, Nicky Matthews is finally doing something she really loves. She is a police sergeant with the Pueblo, New Mexico, police force and the liaison with the Fire-Skye Indian reservation. Nicky has made many friends on the res and is respected by the natives, but she is not liked at all by her boss, who can’t wait to catch her doing something wrong. When a suicide seems to be linked to other missing Fire-Skye people, Nicky defies her boss and investigates. Ancient beliefs and culture, greed, revenge, and modern-day genetics all mix together in this beautifully written police procedural.”
— Nancy McFarlane, Fiction Addiction, Greenville, SC

Beautifully written with a riveting plot and a richly drawn, diverse cast of characters, Hearts of the Missing is the mesmerizing debut from 2017 Tony Hillerman Prize recipient Carol Potenza.

When a young woman linked to a list of missing Fire-Sky tribal members commits suicide, Pueblo Police Sergeant Nicky Matthews is assigned to the case. As the investigation unfolds, she uncovers a threat that strikes at the very heart of what it means to be a Fire-Sky Native: victims chosen and murdered because of their genetic makeup. But these deaths are not just about a life taken. In a vengeful twist, the killer ensures the spirits of those targeted will wander forever, lost to their family, their People, and their ancestors. When those closest to Nicky are put in jeopardy, she must be willing to sacrifice everything—her career, her life, even her soul—to save the people she is sworn to protect.

Carol Potenza is an Assistant Professor of Chemistry and Biochemistry at New Mexico State University. She and her husband, Jose, live in Las Cruces, New Mexico. Hearts of the Missing, her debut novel, is the winner of the 2017 Tony Hillerman Prize.

"Potenza’s outstanding debut and series launch is sure to please fans of mysteries that respectfully depict Native American culture and beliefs... Readers will look forward to seeing a lot more of Nicky and her friends." —Publishers Weekly, starred review

"This action-packed mystery, which vividly evokes the beauty of the New Mexico landscape and its indigenous peoples, will attract fans of the Hillermans (Tony and Anne), leaving readers eagerly awaiting the next installment." —Library Journal, starred review

“[Potenza has] a good ear for dialogue and an understanding and respect for the places and people in the novel.” —Kirkus Reviews

"New Mexico is a spectacular setting for mysteries, and Carol Potenza puts its majestic landscape to unexpected and thrilling use." —David Morrell, New York Times bestselling author of First Blood

"In the Hillerman tradition, Carol Potenza's Hearts of the Missing winds and weaves together like a Tsiba'ashi D'yini basket holding one fine mystery." —Craig Johnson, author of the Walt Longmire Mysteries

"Hearts of the Missing is a stunning debut. It's compelling, intelligent, and brilliantly designed. Brava, Ms. Potenza! I couldn't put it down." —Darynda Jones, New York Times bestselling author

"Potenza stirs the various ingredients together into a satisfying conclusion." —The Albuquerque Journal